Saint-Aubin-sur-Mer in 1944 – Calvados – Battle of Normandy

The village of Saint-Aubin-sur-Mer is defended by a large anti-tank wall and the Wn 27 strongpoint armed by soldiers of the 5th company (commanded by the Hauptmann – captain – Rudolf Gruter) Grenadier-Regiment 736, (716. Infantry Division). The Wn 28 strongpoint consists of a 50 mm anti-tank gun casemate that flanks both ends of the strike.

The Canadians of the 3rd Infantry Division are responsible for disembarking on Juno Beach on D-Day. It is the 8th brigade of the division which receives as mission to seize Saint-Aubin-sur-Mer after having landed on the sector “Nan Red”. The North Shore Regiment commanded by Lieutenant-Colonel D. B. Buell formed the first wave of assault, supported by the 10th Canadian Armored Regiment (The Fort Garry Horse).

The assault on Saint-Aubin-sur-Mer is preceded, as on other landing beaches, by aerial bombardment and then by naval bombardment two hours before the onset of the assault. But at the dawn of June 6, 1944, the sea in front of Juno was extremely rough and the Canadians landed ten minutes behind schedule. Moreover, the bombardments were ineffective: the anti-tank wall and the German defenders are still in place.

Companies A and B of the North Shore Regiment disembark at 8:10 am: the infantrymen must cross a 90-meter open area before reaching the anti-tank wall. Many of the boats carrying company A are affected by mines, causing heavy losses. Both units entered Saint-Aubin with the support of the 10th Canadian Armored Regiment (The Fort Garry Horse), but the progression was slow and lethal. The reinforcement of the companies C and D allows to restart the action: Company C receives a mission to recognize the southern edge of Saint-Aubin while company D holds the village.

At 0855 hours, 48 ​​Royal Marine Commando, commanded by Lieutenant-Colonel JL Moulton, landed in front of Saint-Aubin-sur-Mer and quickly entered the town and then proceeded without delaying in the direction of Langrune-sur-Mer , Its first objective.

At the end of the morning, the entirety of Bernières-sur-Mer is controlled by Canadians. 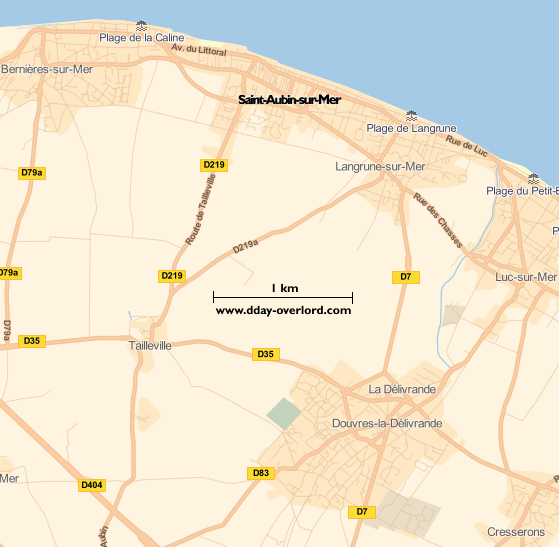