Saint-Clair-sur-l’Elle in 1944 – Manche – Battle of Normandy

From June 10 to 11, 1944, the 115th Infantry Regiment (29th Infantry Division) secured the northern ridge of l’Elle river and was preparing to continue its progress towards Saint-Clair-sur-l’Elle. On June 12th, at 4:30 am, the Americans started a violent artillery preparation south of the l’Elle river and half an hour later, the 1st Battalion left its base and went on the offensive. When crossing l’Elle at the hamlet of the Pont-en-Pierre, a deluge of fire and steel falls on the American soldiers who have no other choice but to retreat. The 3rd battalion, engaged in the attack on the east of the 1st battalion, was severely hit by the enemy fire (in particular the company K which lost 32 of its own, and in particular its unit commander, Captain Louis I. Hille, under the German shells) and must also join the north ridge. Several additional attempts fail despite the commitment of tanks belonging to the 747th Tank Battalion and the losses are catastrophic for the Americans.

Major General Charles H. Gerhardt, commanding the 29th Infantry Division, then decided to engage Colonel Charles DW Canham’s 116th Infantry Regiment. At approximately 1630 hours, the regiment began its movement phase and it was not until 8:15 pm That it begins the crossing of the l’Elle, being supported by the artillery. Immediately, the 2nd battalion reached Saint-Clair-sur-l’Elle and began cleaning the village, which proved to be particularly long, especially as night fell. The Germans still hold certain dwellings, in particular the town hall, the church and the presbytery. It was not until the next day, 13 June, that the commune was fully liberated. The Americans were still subjected to numerous enemy artillery fire during the whole day.

In just two days of operations to capture Saint-Clair-sur-l’Elle, the 29th Infantry Division lost 547 soldiers (killed, wounded, missing or prisoners). During the same period, the American artillery carried out 125 fire supports in the area and consumed more than 6,000 shells. 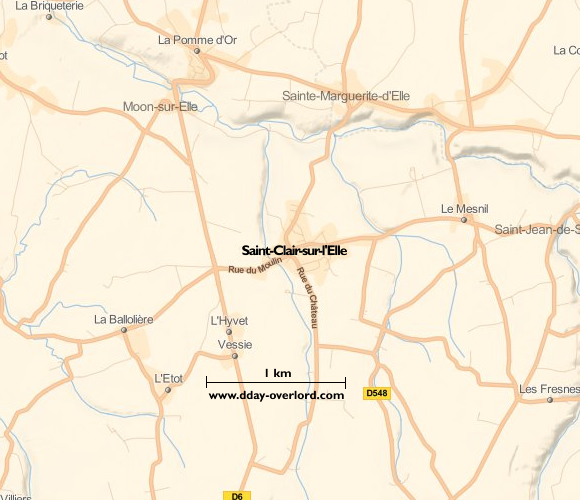