In the spring of 1944, Saint-Côme-du-Mont housed the command post of the third battalion of Grenadier-Regiment 1058 (91. Infanterie Division). This municipality is located on a terrain movement dominating the area and is positioned southwest of the drop zones planned by the US airborne troops during Operation Overlord.

The original plans provided for the 501st Parachute Infantry Regiment (101st Airborne Division) under the command of Colonel Howard R. Johnson to seize the commune of Saint-Côme-du-Mont in the early hours of D-Day in order to facilitate the fall of Carentan, the two localities being connected by the only national road 13. On June 6, 1944, Lieutenant-Colonel Robert A. Ballard commanding the 2nd battalion of the 501st PIR progressed with about 250 soldiers in the direction of Saint -Come-du-Mont. It must stop in front of a German defense point located in the hamlet of Les Droueries (today Haute-Addeville), 500 meters east of Saint-Côme.

The Germans of the third battalion of the Grenadier-Regiment 1058 managed to fix the American paratroopers for 48 hours at the Droueries, giving them time to reinforce the village of Saint-Côme-du-Mont with elements of the Fallschirmjäger Regiment 6 in From Carentan. During this period, the 209 mm guns of the USS Quincy off Utah Beach made several shots in the area, without succeeding in breaking the German defense line.

On June 7, 1944, at 4:30 am, the Americans deployed two forces commanded by Colonel Sink, commander of the 506th Parachute Infantry Regiment, in order to seize the municipality the following day: the first force consisted of the 1st and 2nd Battalions of the 506th PIR and must bypass the Droueries by the north through the hamlet of Beaumont. The second force consists of the 3rd battalion of the 501st PIR and the 3rd battalion of the 327th Glider Infantry Regiment (composed of airborne soldiers belonging to the 1st battalion of the 401st Glider Infantry Regiment) and must pass the Droueries and then advance towards the national road 13. But the progression is slow for both forces, constantly under the fire of the opponent.

Shortly after 9 pm, as the night began to fall, advanced elements of Company D of the 506th PIR reached the crossroads south of Saint-Côme-du-Mont. In order to avoid fratricidal shooting, an orange smoke grenade is thrown on the crossroads: the position is adjoined by a building (the house of the Marie family) which serves as a medical antenna to the Germans of the Fallschirmjäger Regiment 6. The Germans leave several Dozens of paratroopers cross the crossroads and then open fire, killing five parachutists. The order of withdrawal is given, but no one knows by whom: the Americans fall back soon after midnight while they held a key point on the ground. A reconnaissance tank M3 Stuart, almost out of ammunition and fuel, supports the infantry on the crossroads in front of the house of the Marie: the Germans open fire again and a shot from Panzerfaust destroys the tank. Only the tank commander, Lieutenant Walter T. Anderson, manages to escape from the tank. The M3 Stuart’s wreck and the personnel of the ship’s crew (especially one of them who tried to escape from the turret before dying) remain exposed for several days, giving the crossroads the nickname of “Dead’s man corner”.

Meanwhile, the two forces commanded by Colonel Sink are gradually putting themselves in place on the various waiting positions on the night of June 7-8. On June 8, at 4:45 am, a flood of artillery fell on Saint-Côme. The 65th Armored Field Artillery Battalion commanded by Lieutenant-Colonel Edward A. Bailey fired nearly 2,500 105-mm shells for 90 minutes. the village. The 3/327th GIR (1/401st GIR) attacks to the south by making special effort on the “crossroads of the dead man”, the 3/501st PIR is in the center while the 1/506th and 2/506th PIR attack From the east.

When the Americans launched the assault, German mortars installed in the southern sector of Saint-Côme-du-Mont opened fire with a formidable precision, especially at the crossroads 300 meters to the east of the village. Soldiers are exhausted by the fighting that lasts for more than 60 hours: when they can, they fall asleep while the fighting continues. Difficulties in traveling in the area, particularly due to the presence of the marshes that compartmentalize the terrain, result in a complete disorder of the forces involved in the assault, especially since unit commanders and section Not enough time to prepare and coordinate their action: the companies mix, the units mark pauses to reorganize, the action stops gradually. At about 8 am, elements belonging to companies A and C of the 506th PIR approach the village along the Beaumont road, too tired to cross the hedges, but they have to retreat under the intensity of the German fire, losing Two men in action. Some parachutists no longer move and fall asleep while awaiting new orders. Company D of the 506th PIR is also progressing on the road leading to the “crossroads of the dead man” and manages to overtake it and then to climb the national road 13 in the direction of Saint-Côme-du-Mont.

At 9 am the 3rd Battalion of the 501st PIR took turns on National Road 13 and progressed towards Carentan: the paratroopers were taken under fire from a German resistance point located at a distance of 700 meters, At the second bridge to the south. The Germans also benefit from the devastating support of 88 mm guns located in the northern periphery of Carentan which allows them to launch a first counterattack that the 3/501st PIR manages to repel. This battalion, however, retreated to the crossroads of the dead man and installed a solid cover position facing the south to protect the attack on Saint-Côme-du-Mont. This cover is attacked by German paratroopers five times between 9.30 am and 4 pm, without success.

In the middle of the afternoon, an American patrol reported that the Germans appeared to have left the village of Saint-Côme-du-Mont. At 1600 hours, paratroopers and airborne soldiers of the 101st Airborne relaunched the action although they were still under the fire of 88 mm batteries and seized the town. 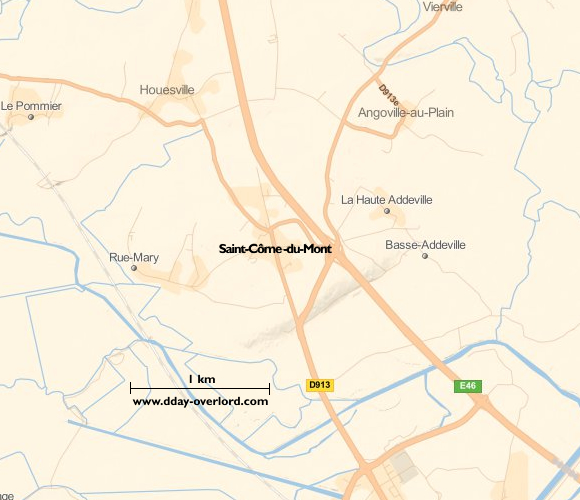