Saint-Contest in 1944 – Calvados – Battle of Normandy

On June 6, 1944, the town of Saint-Contest had to pass under the control of the Allied soldiers, but the delays taken on the beaches during the landing phase did not allow them to seize all the objectives originally planned on D-Day.

Saint-Contest remains in the hands of the German soldiers (belonging successively to the 716. Infanterie-Division, 21. Panzer-Division and 12. SS Panzer-Division) from where they carry out numerous artillery fire: the commune is located on a high ground, a favorable position for artillery observers. On 7 June, the 2nd SS Panzergrenadier-Regiment 25 (SS Panzer-Division) progressed from Saint-Contest to the north and reached the place of Galmanche before being pushed back by land artillery and Allied war vessels. On 9 June in the early afternoon, the 9th Brigade of the 3rd Infantry Division launched an offensive aimed at seizing the commune, but the assault stopped short under the fire of the German defenders.

For more than a month, Saint-Contest remained in the hands of the Germans. It was not until the launch of Operation Charnwood on July 7 that the situation evolved. The English of the 59th Infantry Division began the progression on 8 July and were greeted with violent shots. But the men of the 1st/7th Battalion The Royal Warwickshire Regiment (197th Infantry Brigade, 59th Infantry Division), supported by tanks of the 1st East Riding Yeomanry (27th Armored Brigade) manage to enter Saint-Contest and after very violent Some end in hand-to-hand combat, repelling most of their opponents. Rushed, the Germans attempt a counterattack but fail to cross the allied fire curtain.

Several German snipers continued to kill in the evening, hiding in the ruins, and it was not until July 9 that the English finally seized Saint-Contest. 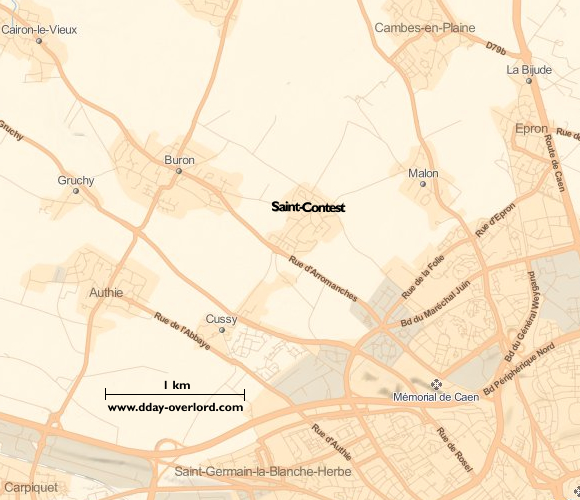