One month after the Normandy landings began, the XIX American Corps commanded by Lieutenant General Charles H. Corlett had to establish a bridgehead west of the Vire river in order to progress towards Périers. The Americans must first seize a number of engineering structures to allow their armored vehicles to continue their progress on the other bank of the Vire and the Canal de Vire and Taute. The 30th Infantry Division of Major General Leland S. Hobbs is in charge of seizing Saint-Fromond and his precious stone bridge which are defended by the Kampfgruppe (task force) Wisliceny of the 2. SS Panzer-Division “Das Reich”.

On the evening of July 6, 1944, after the capture of Airel during the day, the American soldiers put themselves in position on their assault base: the 117th Infantry Regiment (commanded by Colonel Henry E. Kelly) is located north of Airel while the 119th Infantry Regiment (commanded by Colonel Alfred V. Ednie) is to the south. The assault was launched on July 7 at 4:20 am after a rapid preparation of artillery: with canoes, Colonel Kelly’s Americans cross the Vire a hundred meters north of the stone bridge of Saint-Fromond And are quickly taken under fire from German defenders. But the surprise effect of this night assault is successful and the infantrymen, reinforced by sappers of the 105th Combat Engineer Battalion, immediately secure the approaches to the bridges. The 119th Infantry Regiment continued in the process. The engineering teams make the first observations of the stone bridge and the conclusions are reassuring: only fast repairs are necessary. Meanwhile, the infantry regiments expanded their facilities in the Saint-Fromond area to prevent their opponents from destroying the structure by possible, and therefore more accurate, artillery strikes.

At 7 am, the bridge was cleared and half an hour later, the sappers began to install another means of crossing the Vire, while the German artillerymen continued to bombard the area blindly. At 8:45 am, a third makeshift bridge was set up by the military engineer of the 105th Combat Engineer Battalion commanded by Lieutenant-Colonel Carroll H. Dunn. At 10 o’clock the 117th Infantry Regiment passed on the west bank of the Vire river and at 1015 hours the 119th Infantry Regiment began its crossing under fire from Kampfgruppe Heinz (275. Infanterie-Division). As of midday, American armored vehicles cross the stone bridge of Saint-Fromond. The 120th Infantry Regiment of Colonel Hammond Birks crossed at 1:45 pm in spite of problems of coordination with the sappers and the firings of the German artillery.

Very quickly, a real bottleneck of American vehicles (belonging in particular to the 113th Cavalry Group) is formed along the right bank of the Vire river. This phenomenon worsens when a German shell touches a semi-tracked vehicle whose explosion destroys one of the two makeshift bridges installed by the sappers and sinks: any attempt at repair proves to be ineffective. Only two bridges remain at Saint-Fromond. In the wake, the XIX Corps takes the direction of Saint-Lô in the south. 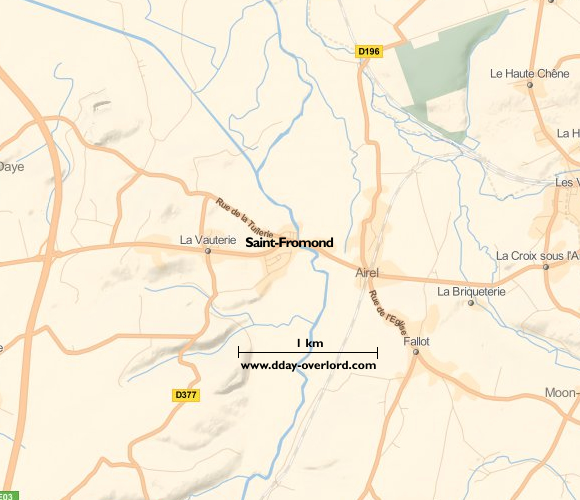