Saint-Georges-d’Elle in 1944 – Manche – Battle of Normandy

On July 11, 1944, Lieutenant-Colonel Jay B. Loveless replaced Fuller. The attack on the 2nd Infantry Division must be preceded by a massive air raid: 192 P-47 fighter bombers in 4 groups of 48 aircraft are responsible for destroying all enemy positions and for reconnaissance missions in the area Saint-Georges-d’Elle and Hill 192. But the visibility is insufficient and the raid is canceled: a single ground attack mission is maintained for the benefit of the division. At 6 o’clock, the ground attack was launched: the 1st Battalion of the 23rd Infantry Regiment (IR) progressed on the right flank, the 3rd battalion was in the center and the 2nd battalion was on the left flank. The 1st battalion is immediately slowed down by a terrain where the advance is difficult as well as by the adversary: ​​the 1st section of company A warns against a ravine that the vehicles can not cross. 4 tanks belonging to Squadron C of the 741st Tank Battalion are now in a supporting position and the section immediately engages with the German paratroopers who use their artillery: all the soldiers of the section are killed or wounded with the exception of 13 of them. The ravine is then baptized by the Americans the “Purple Heart Draw” (which is the name of the American wounded medal). The other two sections of the company bypass this natural obstacle by the west. This maneuver lasts all day against German paratroopers who are favored by the terrain conducive to defense. The survivors of the 1st section, then commanded by Sergeant William C. Stanley, advance and regain the ascendancy over their opponent and reach the departmental 195 at the end of the leap.

The 3rd battalion rises to the assault at noon and manages to seize Saint-Georges-d’Elle after violent fighting. The Germans are pushed to the south and the Americans settle in defensive for the night, company L assuring the immediate surroundings to the south-east of the village. The fighting to repel the Germans south of the departmental road 972 connecting Saint-Lô to Bayeux extend for a week. 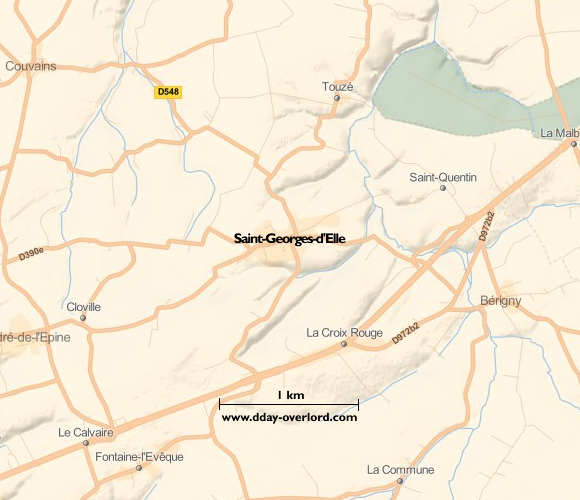