Saint-Gilles in 1944 – Manche – Battle of Normandy

On July 24, 1944, the Americans launched Operation Cobra to pierce the front line south of Cotentin: 1,600 bombers of the 8th U.S. Air Force are engaged and the launch of the offensive begins the next day. On 25 July at 9.40 am, a new air raid was launched with the release of 3,300 tons of bombs and by 11 am the ground units launched an assault. Slowed by an unexpected German resistance given the amount of bombs fallen in the area, the Americans temporarily stop their assault at nightfall.

On 26 July, the US air force flies over the area and the P-47 Thunderbolt make numerous strikes at Saint-Gilles. The armored vehicles of the 2nd Armored Division then relaunched the offensive in the morning against the elements of the Panzer-Lehr-Division, 352. Infanterie-Division and 3. Fallschirmjäger-Division. The American tanks carried infantrymen to accelerate the general advance and they finally seized the village of Saint-Gilles. 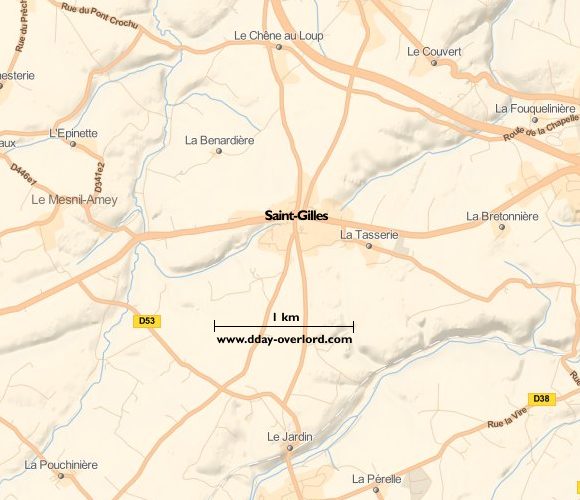