Saint-Laurent-sur-Mer in 1944 – Calvados – Battle of Normandy

The village of Saint-Laurent-sur-Mer and its beach are protected by six strongpoints coded from Wn 64 to Wn 69. To reach the beach, two valleys allow to cross the plateau: to the west the valley of Les Moulins (not to be confused with the one of the same name located north of Colleville-sur-Mer), to the east that of Le Ruquet.

20 months before the first waves of American assaults on this beach, a detachment of the 117-strong British 62nd Commando, led by Major March Philipps, set foot on the shore of Saint-Laurent-sur-Mer in the night from 12 to 13 September 1942. Code name of the mission: Operation Aquatint. British soldiers, over-trained and members of the SSRF (Small Scale Raiding Forces), landed not in front of the village of Sainte-Honorine-des-Pertes but in front of Saint-Laurent-sur-Mer. The current deported MTB 44 (having flown across the Channel) and then the small Goatley transport boat four kilometers to the west. Immediately after the disembarkation, a German patrol surprised British commandos attempting to make a prisoner before retreating and re-embarking on the Goatley. A sharp exchange of gunfire began, mainly from WN 69. Three members of the commando were killed during the brief but intense combat: Major March Phillipps, 32, Sergeant Alan Williams, 22 years old and Private Richard Lehniger, 42 years old. Two were seriously wounded: Lieutenant Hall, left for dead on the beach (he had in fact received a violent grenade-thrust, handled at the back by a German patrol soldier) and Howard. Four commandos managed to escape through the Normandy countryside before being captured, except Captain Graham Hayes (who escaped German patrols), Captain John Burton, Private Adam Orr (Polish) and Private Jan Helling (Dutch).

In the spring of 1944, when the Allies prepared the Normandy landing, the Americans defined several beach areas facing Saint-Laurent-sur-Mer, which were baptized from west to east: Dog White, Dog Red, Easy Green, Easy Red. These sectors, all belonging to the wider “Omaha Beach” sector, represent a front about three kilometers wide. They also encode the two valleys: Les Moulins becomes “D-3”, Le Ruquet becomes “E-1”. Two regiments were designated to land in the first wave of assault: to the west the 116th Infantry Regiment (29th Infantry Division) commanded by Colonel Charles DW Canham and to the east the 16th Infantry Regiment (1st Infantry Division) commanded by Colonel George A. Taylor. Company F of the 116th Infantry Regiment (IR) is to disembark at Dog Red, Company E (116th IR) at Dog Red, Company E (16th IR) at Easy Green and Company F (16th IR) at Easy Red. The Germans stationed in Saint-Laurent-sur-Mer belong to the 5th Company (commanded by the Oberleutnant Hahn) of Grenadier-Regiment 916 (352. Infanterie-Division) and to the 10th Company, Grenadier-Regiment 726, 716. Infantry Division).

On June 6, 1944, at 1 am, the landing ships en route to Omaha Beach arrived in sight of the coast and stopped the progression 23 kilometers from the shore. German sentries spot the dark masses on the water but fail to identify them. Several Allied aerial bombardments strike the sector but without touching the defenses. Shortly after 5.10, the warships in front of Omaha belonging to Task Force O opened fire on the German positions. 29 Sherman amphibious tanks coded “Duplex Drive” belonging to the B and C companies of the 743rd Tank Battalion are launched but only 3 of them do not sink: the swell is far too strong for the amphibious device of these special tanks.

The first wave of assault hit Normandy at 6.35 am. Silent until then (not to be spotted by the Allied naval gunners), the German defenses opened fire when the soldiers had water to the thighs. A deluge of steel and fire defeated the Americans who instantly recorded very high losses. In just a few minutes, 90% of the first wave of assault is decimated. Moreover, the current deviated the boats eastward and the soldiers did not land at the planned sites, which adds to the general disorder. At 7.30 am, while most of the soldiers were stationed on the beach without sufficient armored support, attempts to extricate themselves from this real shooting receptacle multiplied. Guided by Major Sidney V. Bingham, Jr. commanding the 2nd battalion of the 116th IR, about fifty soldiers stormed the waterfront dwellings at Les Moulins, opposite the “D-3” exit. In particular a three-storey building. They seize it and decide to continue the offensive to clear the valley but the crossfire of the opponent prevents them.

The assault waves follow one another but the outputs “D-3” and “E-1” are still not clear. The infantrymen shelter as they can, behind the obstacles and the anti-tank wall. On the Easy Red beach area, several amphibious tanks managed to reach the shore and support the infantry. Reinforcements accumulate on the beach and the Americans increase their firepower considerably. Noting that they can not seize the exits by a frontal attack, they then seek to climb the slopes to reach the top of the plateau to attack German positions in reverse. At 9:00 am, members of the 116th IR F, G, I, K and L companies entered the plateau and infiltrated the village of Saint-Laurent-sur-Mer. Faced with the locality Les Moulins, staff of the company I pierce several breaches through the barbed wire (using torpedoes Bangalore or simply cutting the threads) and in turn infiltration, followed by company K Which loses about fifteen soldiers during the climb. The company M of the 116th IR faces the exit “E-1” and manages to set up a fire support at the foot of the cliff. Six of his soldiers are sent to reconnoitre to find a path to the plateau, but they are all killed. At the top of the plateau, minefields, machine gun fire and mortar shell explosions are delaying progress. Elements of companies A and E of 16th IR manage to leave Easy Red and reach the plateau.

The 18th Infantry Regiment (1st Infantry Division) commanded by Colonel George Smith, Jr. landed on Easy Red starting at 9:30 am. The beach was jammed with materials and vehicles of all kinds and the shooting was still extremely fierce. Landing of the regiment until the beginning of the afternoon). At 10:30 am, the 115th Infantry Regiment (29th Infantry Division) commanded by Colonel Eugene N. Slappey landed on Dog Red. The regiment only began its inland advance at 1400 hours. It takes the direction of Saint-Laurent-sur-Mer.

The Germans installed machine guns on the plateau to protect access to Saint-Laurent-sur-Mer. Organized in small groups resolved to fight as long as possible, they rely on a terrain composed of large openings surrounded by hedges, favorable to the defense. Company I of the 116th IR which is to the west of the Moulins discovers a battery of rocket launchers Nebelwerfer and takes it: it was already partly out of use following the shots of the Allied navy. The Germans concentrated the defense of the village from the most western buildings, where several precision shooters are stationed. Positions of machine guns are installed at the exit of the valley of the Mills. In the early afternoon, the 2nd battalion of the 115th IR stormed Saint-Laurent-sur-Mer from the east but could not repel the few soldiers there.

At 4 pm, the “E-1” exit of the Ruquet is entirely cleared by the sappers, which allows the tanks survivors of the 741st Tank Battalion to reach the interior from 17 hours. They advance towards Saint-Laurent-sur-Mer to support the attack, accompanied by artillerymen of the 58th Armored Field Artillery Battalion (29th Infantry Division), while the 32nd Field Artillery Battalion (1st Infantry Division) Position to the north of the commune. The allied navy (in particular the USS Tuscaloosa) opened fire on the village and particularly on the church steeple, causing also losses in the American ranks which put an end to the assault of the 115th IR at the end of the afternoon. The 2nd battalion then lost about one hundred men and six officers: it moved about 300 meters along the Port-en-Bessin road, while the 1st battalion progressed for a distance of 500 meters South of Saint-Laurent-sur-Mer and settled forbidden to Formigny for the night: his commander, Colonel Richard C. Blatt, was wounded in the head by a burst of mortar shells and had to be evacuated He dies of his wounds on the ship which transports him to England).

At nightfall, the Germans still hold Saint-Laurent-sur-Mer and installed a line of defense at the height of the locality Les Fossés Taillis.

On the following day, June 7, the 3rd battalion of the 115th IR commanded by Major Victor P. Gillespie seized Saint-Laurent-sur-Mer and repelled the last German defenders to the west, supported by naval artillery. At 9 am, the village is under control and the battalion then heads towards Vierville-sur-Mer. The installation of a breakwater line (codenamed “Gooseberry 2”) in front of Saint-Laurent-sur-Mer begins and continues until 12 June. It consists of 55 ships of all kinds, supplied by various nations (22 from Great Britain, 16 from the United States, 17 from other allied countries), which are sunk in the framework of the installation of the artificial port “Mulberry A”.

That same day, in the Dog White area, the 3rd section of the 607th Quartermaster Graves Registration Company, attached to the 6th Engineer Special Brigade, begins digging the graves of the provisional cemetery on the dunes between the plateau and the beach. 457 American soldiers, sailors and English airmen and German soldiers are buried there. On June 10, 1944, a new terrain was selected to welcome the fallen soldiers on the plateau of Colleville-sur-Mer and the transfer of the bodies began immediately.

From June 7 to 9, 1944, the 834h Engineer Aviation Battalion constructed an Emergency Landing Strip (Emergency Landing Strip) coded as E-1 (the E recalling “Emergency”) on the plateau to the west Of the valley of the Ruquet. The sappers of Lieutenant-Colonel John Livingstone are working under enemy fire. On June 9, 1944, at 6 pm, a C-47 transport aircraft could land on the runway. The evacuation of the seriously wounded, who had been cared for at 13th Field Hospital also located in Saint-Laurent-sur-Mer, could begin.

The airfield (the first one to be fully operational during the Battle of Normandy) was quickly renamed “ALG A-21 C” (C for Cargo) and evacuated 15,000 wounded from 9 June to 25 August 1944 to hospitals located in England. 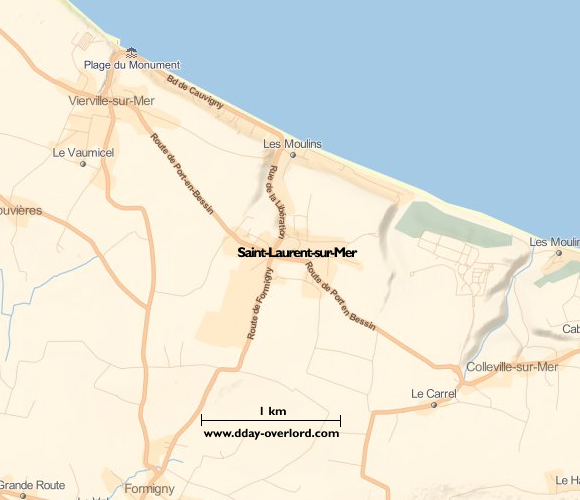