Saint-Martin-de-Fontenay in 1944 – Calvados – Battle of Normandy

The Allies reached Saint-Martin-de-Fontenay on July 20 during Operation Atlantic, which aimed to capture the heights of Verrières Ridge, which overlooks the region between Caen and Falaise. The commune of Saint-Martin-de-Fontenay, held by elements of the 272. Infanterie-Division, is stormed by the regiment Black Watch of Canada (5th Infantry Brigade, 2nd Infantry Division) Canadians to the north. Early in the afternoon, abundant rain falls on the area and considerably hinders operations. The Germans used to move the underground galleries of a mine located to the southeast of the village, at the place called La Fabrique.

On July 24, 1944, the Allies launched Operation Spring, which aims to capture the heights of Verrières Ridge, which overlooks the region between Caen and Falaise. The commune of Saint-Martin-de-Fontenay is one of the objectives of Spring and is located on the starting line of the offensive: it must be taken by assault by the Queen’s Own Cameron Highlanders of Canada (6th Infantry Brigade, 2nd Infantry Division). Due to the almost continuous rainfall since 20 July, the intelligence services were unable to use the reconnaissance aircraft to take pictures of the German defense lines and the enemy positions were very little known.

After a major bombardment that takes place on the night of July 24-25, the Canadians of the Queen’s Own Cameron Highlanders of Canada begin their offensive but are quickly fixed, they do not manage to seize St. Martin. The Black Watch is deployed in the first rung, supported by the 27th Armored – Sherbrooke Fusilier Regiment (2nd Armored Brigade) and the 6th Armored Regiment – 1st Hussars (2nd Armored Brigade). The progression is slow because of a fierce resistance on the part of the 272. Infantry Division which does not yield. In the early hours of July 25, Black Watch’s corps commander, Lieutenant-Colonel S. T. Cantlie, was evacuated following an injury by a machine gun burst and died shortly afterwards. He was immediately replaced by Major F. P. Griffin. The Canadians seize Saint-Martin-de-Fontenay and are ordered to continue south on the morning of July 25, but they are caught in the crossfire of the Germans and have to retreat: only 15 of the 325 soldiers of the regiment manage to reach St. Martin, Major Griffin was killed.

The situation is critical for Canadians who are struggling with the village and are setting up a line of defense somehow. At 6 pm, the Germans launched a counter-offensive by deploying the Zollhöfer Kampfgruppe (task force) of the SS Panzer-Division “Hohenstaufen” towards Saint-Martin-de-Fontenay to pierce the front but without result, and Zollhöfer diverts his offensive towards Saint-André-sur-Orne at 18 hours 40.

A new offensive of the SS Panzer-Division is on July 28, but is opposed by the Allies, who gradually secure the ruins of the village. The Germans were definitely pushed out of the town on August 1, but it was not until the launch of Operation Totalize on August 7 that the front line moved away permanently south. On that day, the Canadiens du Fusiliers Mont Royal 6th Infantry Brigade, 2nd Infantry Division) began their offensive from Saint-Martin to May-sur-Orne. 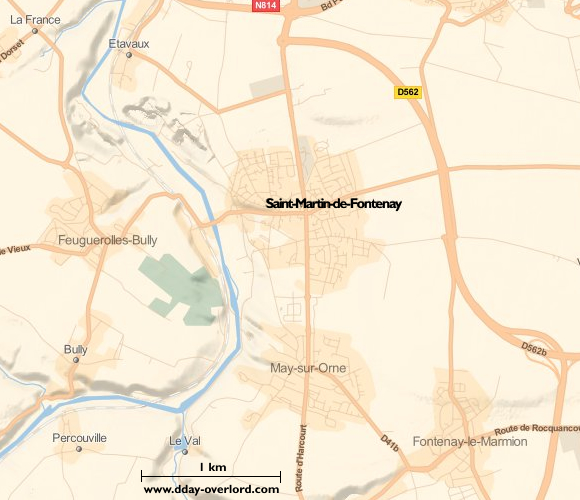