Saint-Martin-de-Varreville in 1944 – Manche – Battle of Normandy

In the spring of 1944, the village of Saint-Martin-de-Varreville was occupied by the first battery of the Heeres-Küsten-Artillerie-Regiment 1261 commanded by the Oberleutnant Erben, which armed the Wn 108 strongpoint. Installed and shelter notably four guns of 122mm K390/2 of Russian origin. This battery was subjected to an air bombardment during the night of 28 to 29 May 1944 led by 64 Lancaster aircraft of the Royal Air Force. A renewed attack on the night of June 5 to 6, 1944.

Saint-Martin-de-Varreville is located at the western end of lands deliberately flooded by the Germans along the coast to hinder any offensive land or air. The departmental road 423, which connects the interior of the land to the beach by crossing the marshes, leads to the village which thus becomes a priority objective for the 502nd Parachute Infantry Regiment of the 101st Airborne Division: controlling Saint-Martin-de-Varreville, the Americans ensure the evacuation of the bridgehead by this road that they call “Exit 4”.

In the early hours of June 6, 1944, the battery of Saint-Martin-de-Varreville was attacked by American paratroopers of the second battalion of the 502nd Parachute Infantry Regiment (502nd PIR) commanded by Lieutenant-Colonel Steve A. Chappuis. The position is quickly under control, the Germans having abandoned the site. The first battalion of the 502nd PIR, commanded by Lieutenant-Colonel Patrick F. Cassidy, took over the village. The latter was also crossed in the early morning by the 3rd Battalion under the command of Lieutenant-Colonel Cole and then by the infantrymen of the 1st and 2nd battalions of the 22nd Infantry Regiment of the 4th Infantry Division. 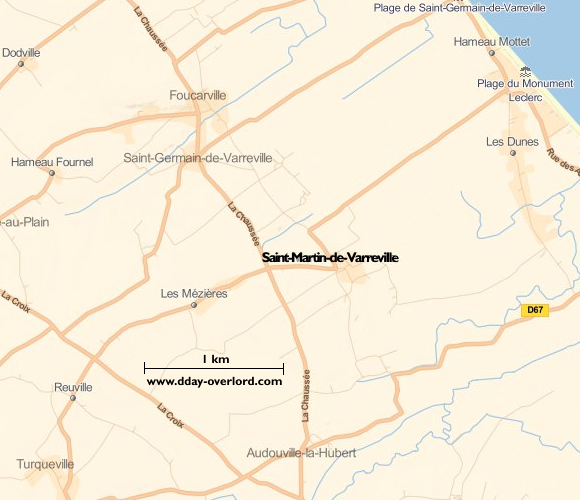