Saint-Sauveur-le-Vicomte in 1944 – Manche – Battle of Normandy

On July 24, 1944, the Americans launched Operation Cobra to pierce the front line south of Cotentin: 1,600 bombers of the 8th U.S. Air Force are engaged and the launch of the ground offensive begins the next day. On the right flank of the starting base of the operation, the American units are instructed to pin down the opponent to prevent it from containing the breakthrough.

On 13 June, the Americans were preparing to take Cherbourg. They initially plan to reach the western coasts of Cotentin and thus head towards Saint-Sauveur-le-Vicomte. The airborne paratroopers and soldiers of the 82nd Airborne Division are less than one kilometer east of this town on 15 June.

On June 16, starting at 5 am, the 82nd Airborne Division rushed to attack the German defenses on the heights to the east of the village. The American paratroopers, opposed to elements of the 265. Infantry Division, are unable to break through the front line. It was the attack by the 325th Glider Infantry Regiment’s airborne soldiers backed by the 746th Tank Battalion’s A squadron tanks, which forced the Germans to withdraw. From this new position, the Americans observed the withdrawal maneuver of Their opponents. General Ridgway, commanding the 82nd Airborne Division, asked for permission to deploy his forces on the other side of the River Douve. Having received a favorable reply, he ordered his troops to cross the bridge and secure the approaches southwest of Saint-Sauveur-le-Vicompte. The Germans, who have largely retreated, do not offer any special resistance and the airborne soldiers can install a defensive perimeter more than 2 kilometers on the outskirts of the village. The sappers immediately put in place a crossing point on the Douve which allows American tanks to access the interior of the commune.

The following day, June 17, the town is entirely liberated and at 5 am, Saint-Sauveur-le-Vicomte was crossed by the 47th Infantry Regiment (9th Infantry Division) commanded by Colonel George W. Smythe, which moved along County Road 15 southwest. 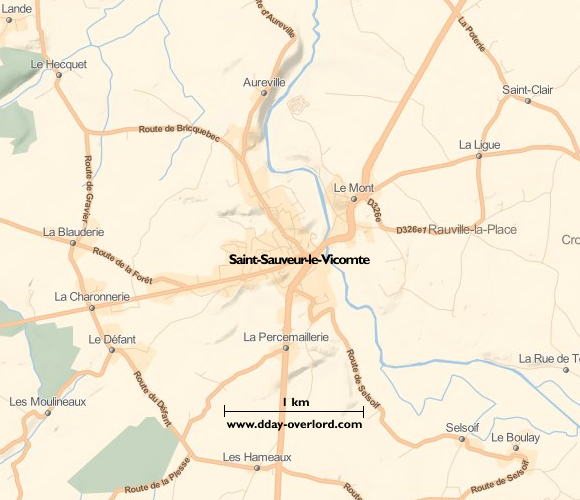