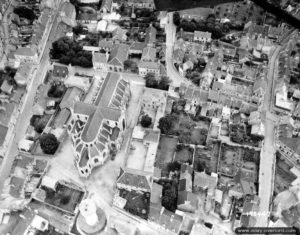 Aerial view of downtown Saint-Vaast-la-Hougue in 1944.
Photo: US National Archives

On the night of September 24 to 25, 1941, a British commando strong of thirty soldiers belonging to the No.1 section (No.5 Troop, No.1 Commando), arrives discreetly on the beach of Saint-Vaast-la-Hougue. Commissioned by Lieutenant Scaramanga, they crossed the English Channel aboard HMS Prince Leopold and approached the shore from small motorized boats. This mission, dubbed Operation Deep Cut, has several objectives: to test the enemy’s level of vigilance, to obtain intelligence on the enemy’s defensive system and to maintain pressure on all the Channel coasts in order to fix the German forces. The commandos make the recognition of several houses. A bicycle patrol is detected by the commandos who decide to open fire: two Germans are killed, a third is wounded and taken prisoner. Breaking the contact towards the boats, two English commandos are wounded during the skirmish. The German prisoner dies of his injuries once on board HMS Prince Leopold.

On June 6, 1944, this sector is caught under the fire of the English monitor (small battleship) HMS Erebus and the US heavy cruiser USS Tuscaloosa.

Unable to hold ground, the Germans belonging to various scattered units of the 709. Infanterie-Division are gradually withdrawing and favoring the night from June 19th. On June 21, locals hoist a white flag to encourage Allied warships to save the village. The latter, cruising off the Cotentin Peninsula, support the progress of American soldiers towards Cherbourg. That same day, the 1st platoon of the 24th Cavalry Reconnaissance Squadron (4th Reconnaissance unit, 4th Infantry Division) under the orders of Lieutenant Alsauer frees Saint-Vaast-la-Hougue around 12:30, before continuing towards Barfleur.

The port of Saint-Vaast-la-Hougue is rehabilitated after the fighting to ensure the supply of American forces in the Cotentin, under the responsibility of the 342nd Engineer Regiment (General Service). The unloadings begin July 9, 1944 with the support of elements of the 11th Port of Embarkation. Up to 1,200 tons of equipment, food and fuel are unloaded daily.
Unloading operations continued at a steady pace until mid-October, when the number fell and finally stopped in December 1944.