As of 3 July 1944, the VII American Corps commanded by General Collins launched an offensive aimed at piercing the front to the south of Cotentin after the liberation of Cherbourg. The Germans set up a solid defensive line called “Mahlmann Line” by the name of Generalleutnant Paul Mahlmann, commander of the 353. Infanterie-Division, who imagined it. The Americans are slowed by these defenses: while they initially plan to reach the commune of Sainteny on 4 July, they reach the northern edge of the village only on 9 July.

On July 9th at 11:30 am, the 2nd Battalion of the 331st Infantry Regiment (83rd Infantry Division) commanded by Lieutenant-Colonel James F. Faber engaged the fight for the liberation of the village of Sainteny. The latter is defended by paratroopers of the Fallschirmjäger Regiment 6 (91. Infanterie Division), SS-Panzergrenadier Regiment 38 (17 SS Panzer-Division “Götz von Berlichingen”) which is reinforced by elements of the SS Panzer – “Das Reich” Division. Detecting an armored platoon in the opposing device, Faber triggers an artillery preparation and launches an armored raid. The first tank was destroyed, but the American casualties were very high: the tanks had to retreat and two of its infantry companies lost their unit commander. Although company G on the left flank was fixed by the opposing shots, Faber had companies E and F reorganized to renew the offensive. Many executives were put out of action, and Faber led the attacks under mortar and small arms fire, personally participating in the destruction of an additional enemy tank and the neutralization of a third tank. 65 German infantrymen were killed during these engagements. The 2nd battalion enters Sainteny, forcing its opponents to retreat south of the village. In reaction, the Germans triggered a barrage directly on the commune, continuing to transform Sainteny into a field of ruins. Lieutenant-Colonel Faber organizes the defense of the village, which must secure its access to the east, to the south and to the west, the front line forming a salient in this place.

From dusk to the following day, July 10, the German bombardments continue intermittently. Then, at dawn, these artillery shots intensify in preparation for an opposing counter-attack that is backed by armored vehicles. Fighting with a light weapon and a heavy weapon is committed to the doors of the village and Faber is killed during the engagements. Despite the destructive firepower of the Germans and the catastrophic loss rate of the 331st Infantry Regiment, the Americans hold fast and maintain control of the village. The fighting continued at the gates of Sainteny until 21 July, when the 83rd Infantry Division commanded by Major General Robert C. Macon resumed its southern advance. Meanwhile, the Germans managed to infiltrate twice into the ruins before the front line moved away definitively.

The commune of Sainteny is destroyed to almost 80%: 151 of the 245 houses of Sainteny are shaved and 2,500 head of cattle have died during the multiple bombings. 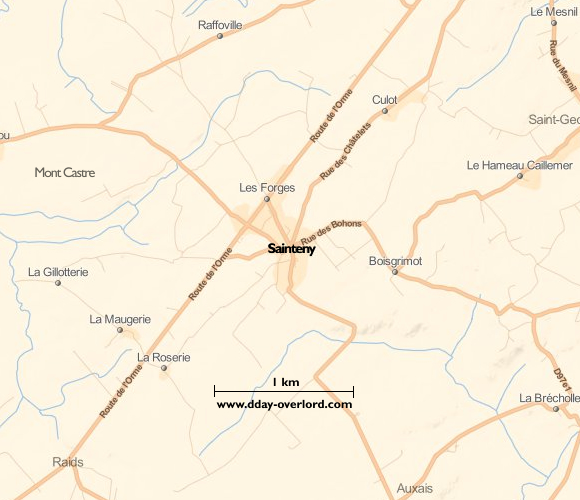