Sommervieu in 1944 – Calvados – Battle of Normandy

In the spring of 1944, the town of Sommervieu houses the command post of the 8th battery of the Artillerie-Regiment 352 (352. Infanterie-Division) armed with 105 mm FH 18/40 howitzers.

On June 6, 1944, the British of the 50th Infantry Division aimed to reach the Caen-Bayeux road after landing on Gold Beach. But the difficulties encountered during the landing phase lead to multiple delays in the initial schedules. The 2nd Battalion Essex Regiment (56th Independent Brigade), temporarily attached to the 50th Infantry Division, disembarks from 1 pm and progresses on the right flank in the direction of Bayeux, opposed to survivors of Grenadier-Regiment 726 (716. Infanterie- Division) and Grenadier-Regiment 916 (352. Infantry Division).

On the evening of D-Day, the 2nd Battalion Essex Regiment was ordered to stop at the northern outskirts of Sommervieu for the night: the English settled in prohibition facing the south. On the following morning, June 7th, they seized the commune.

From 14 to 22 June 1944, the engineers of the Royal Engineers 24th Airfield Construction Group constructed an aerodrome called ALG B-8 and located west of Sommervieu. Two parallel tracks are installed, one in compacted soil and the other covered with SMT, used in particular by the Recce Wing, 123/136 Wing and the 145 Wing (74 squadron, 329 squadron “Cigognes”, 340 squadron “Ile-de-France”, 341 squadron “Alsace”- France Free). This airfield was operational until August 1945. 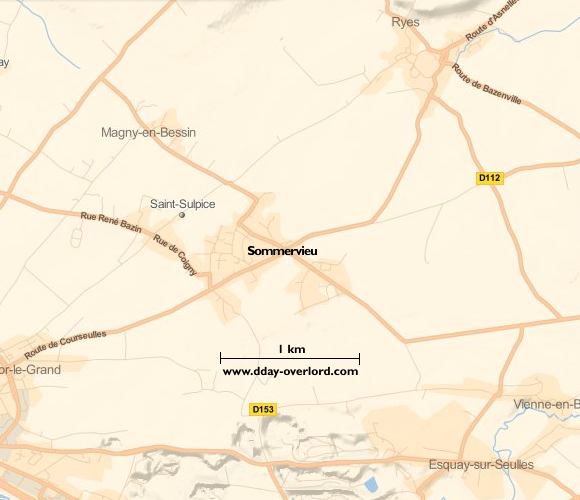