Tilly-la-Campagne in 1944 – Calvados – Battle of Normandy

The commune of Tilly-la-Campagne is located on a slight movement of land of a height of 76 meters which allows to have views on the area. It is defended by elements of the 1. SS Panzer-Division “Leibstandarte Adolf Hitler”. In accordance with Operation Spring, which was launched on July 25, 1944, the North Nova Scotia Highlanders (9th Infantry Brigade, 3rd Infantry Division) is in charge of seizing it.

The attack was preceded by a major aerial bombardment. Canadians begin the progression from 3:30 in the morning by the light beams that are directed to the clouds to create a reverberating effect. However this system is double edged in that it also allows the Germans to see their opponents. The North Nova Scotia Highlanders is progressing in two spindles: B and D in the east and Company C in the west. The latter penetrated to the north-west of the village without major difficulties despite the opposing defense. The other two companies are encountering more obstacles and the commanding officer of D Company, Major Matson, is killed, as is his replacement a few minutes later, Captain Nicholson. Major Wilson, commander of Company B, was wounded during the fighting. As communication problems were frequent, Canadians set up a signal system to keep up to date, and at 4:30 am, a flare was fired: it was a sign of the success of the mission: Tilly-la-Campagne is under control. Lieutenant-Colonel Charles Petch, commanding the North Nova Scotia Highlanders, is relieved.

But this satisfaction does not last: Petch quickly realizes that the entire village is not under control and that the Germans, holding the southern half of the village, infiltrate everywhere. Moreover, they are reinforced at dawn by armored units which cause very heavy losses in the opposing camp. Throughout the day of July 25, the fighting continues unabated and until hand-to-hand in the streets and in the houses. Lieutenant-Colonel Petch used company A and C companies of the Fort Garry Horse for Company C west of Tilly-la-Campagne, but Canadian tanks could not compete with Panther’s tanks from the 1. SS Panzer-Division, which were attacked: eleven tanks were destroyed in a few minutes and C company fell back towards Bourguébus. From a favorable position and throughout the afternoon they support as best they can the soldiers of company C who dig boreholes and bury themselves to protect themselves from the incessant firing and bombardment.

More and more isolated and inferior in numbers, Petch ordered his men to withdraw in favor of the night and return to their original starting point. With communications going badly, not all Canadians receive the information and the survivors of Company A, 9, do not withdraw until the early morning of July 26. The Germans of the SS Panzer-Division took advantage of the darkness of the night to strengthen their presence in Tilly-la-Campagne. Small groups of Canadians remain stuck in the ruins of the village, isolated and plagued by certain death.

On July 26, despite the terrible losses, the North Nova Scotia Highlanders was ordered to relaunch its offensive to seize the village, supported by Stormont, Dundas and Glengarry Highlanders, and tanks from C Company, Fort Gary Horse. The general commanding the 9th Infantry Brigade, Brigadier Cunningham, rebelled against this order with General Keller commanding the 3rd Canadian Infantry Division. Finally, no assault is launched, as the chances of success are slim. From July 24 to 26, the North Nova Scotia Highlanders recorded the loss of 58 of its soldiers. The Stormont, Dundas and Glengarry Highlanders has 4 killed while Fort Gary Horse has 13 killed. The front did not evolve in the days that followed, but the soldiers continued to die, struck by artillery fire. Operation Spring is a failure and Canadians have paid the price.

The Canadians reorganize their system with the arrival on the front of the 4th Armored Division commanded by Major General C. Foulkes. They renewed the attack on Tilly-la-Campagne on the night of July 30-31 with the commitment of the 5th Infantry Brigade (2nd Infantry Division) supported by the Essex Scottish Regiment (5th Infantry Brigade). The offensive is preceded at one o’clock in the morning on July 31 by a diversion attack conducted by Company B of the Lincoln and Welland Regiment (10th Infantry Brigade, 4th Armored Division) in the direction of Bourguébus. But the diversion is quickly stopped by the German mortars. At 2:30 am, the Calgary Highlanders (4th Infantry Brigade, 2nd Infantry Division) rushed towards Tilly behind an artillery barrage. Despite heavy casualties, Canadians are able to get involved in the village and violent fighting continues for the rest of the night. However, they did not stay there for a long time and retreated while a Royal Regiment of Canada (4th Infantry Brigade) company was sent to reinforce it, returning to meet Calgary Highlanders survivors who retreated.

At 1430 hours, a new offensive was launched, without any more success. The Allies then ordered the massive and permanent shelling of the village of Tilly-la-Campagne, both by artillery and by aviation. The ruins are bombarded until they no longer resemble a pile of ashes. Regularly, Canadian patrols venture out on the outskirts of the village to test the enemy’s device: these actions are particularly deadly because, despite all expectations, the S.S. hold on despite the intensity of the shelling and open fire on the patrols. Progressively, the Germans were reinforced by the arrival of a new division on the Norman front, the 89. Infanterie-Division, which replaced the exhausted men of the 1. Panzer-Division: at Tilly-la-Campagne, The Grenadier-Regiment 1055 who took a stand. The SS of the Leibstandarte estimate that they have just undergone the most important bombing since the beginning of the war.

Meanwhile, the Allies are developing a new offensive to shake German defense lines south-east of Caen: Operation Totalize, which begins on the evening of 7 August 1944 with heavy bombardments . This time, in the early hours of August 8th, the 2nd Battalion The Seaforth Highlanders (152nd Infantry Brigade, 51st Infantry Division) rushed to attack, but the elements of the 89. Infantry Division repelled this first attack of the day. The 5th Battalion The Seaforth Highlanders (152nd Infantry Brigade) took over. At 7 o’clock in the morning, it was the turn of the B Company tanks of the 148th Regiment Royal Armored Corps to intervene: the Grenadier-Regiment 1055 folded, Tilly-la-Campagne finally fell into the hands of the Allies at the end of Morning, but at what price!

No fewer than ten regiments of infantry and allied cavalry, dozens of support and support units as well as air forces were hired to seize this small Norman village reduced to ashes at the beginning of August 1944. The allied losses amounted to several hundred soldiers killed, wounded and disappeared.

August 8, 1944: Canadian Sherman tanks advance during the Falaise attack between the localities of Hubert-Folie and Tilly-la-Campagne. Photo: IWM. 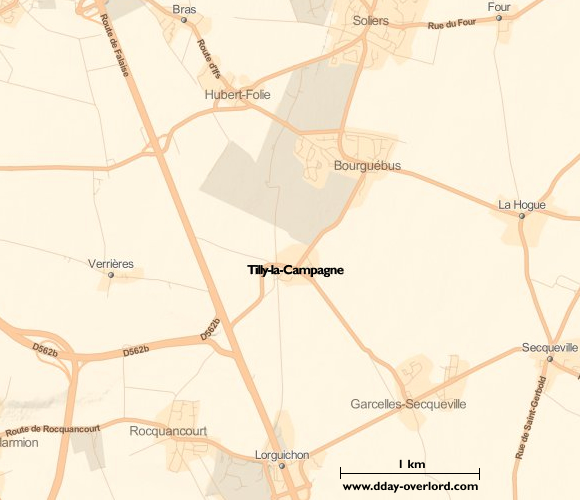