Touffreville in 1944 – Calvados – Battle of Normandy

The commune of Touffreville in Calvados is located southwest of the marshes of the Dives. The Germans who occupy the area belong to the 5th company commanded by Hauptmann (captain) Ackermann and belonging to Panzergrenadier-Regiment 125 of the 21. Panzer-Division.

The village of Touffreville is located immediately south of one of the four jump zones planned by the 6th Airborne Division for its airborne assault on the night of June 5-6, 1944, the drop zone coded “K” by the Allies. This area is dedicated to the 8th Battalion Parachute Regiment (3rd Para Brigade) commanded by Colonel Alistair S. Pearson. In spite of disastrous parachutes, the 8th Battalion manages to carry out the essential part of its missions and establishes during the night and part of D-Day a cover directed towards the south facing Touffreville, protecting the main action which consists of destroying Several bridges over the Dives and the Divette. When this mission is accomplished, the English paratroopers retire to Le Mesnil. On June 7, 1944, light Tetrarch tanks belonging to the 6th Airborne Armored Reconnaissance Regiment supported reconnaissance between Escoville and Touffreville but were repulsed by the Germans: the English lost two tanks, one was destroyed by one mine, the other was hit by a self-propelled gun.

During the weeks that follow, the front does not evolve. Touffreville is subjected to regular bombing and the Germans, reinforced by elements of the 16. Feld-Division (L), gradually evacuate the village in order to prepare its defense. On 18 July, the Allies launched the Goodwood operation to seize Caen: the offensive began with a massive bombardment with nearly 1,217 tons of bombs falling on the village and transform the dwellings into a heap of ruins. The German line of defense collapsed and the Allies launched an assault. The 3rd Royal Tank Regiment, belonging to the 159th Infantry Brigade of the 11th Armored Division, seized Touffreville in the early hours of Operation Goodwood on 18 July 1944.

June 1944: a light tank Tetrarch named “Apple Sammy” in the area of Touffreville and belonging to the 6th Airborne Armored Reconnaissance Regiment. It was most certainly destroyed on June 7, 1944, when the 6th AARC lost two of these missiles (one hit by a mine, the other destroyed by a German self-propelled gun). Photo: IWM. 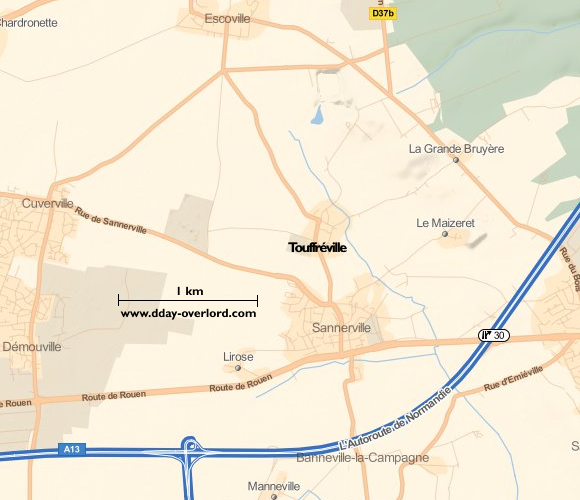