Tour-en-Bessin in 1944 – Calvados – Battle of Normandy

At the end of the afternoon on June 7, 1944, the 2nd Battalion of the 26th Infantry Regiment (1st Infantry Division) commanded by Lieutenant-Colonel Derrill M. Daniel (temporarily attached to the 18th Infantry Regiment) seize the crossroads between the national road 13 and the departmental road 206 west of Tour-en-Bessin. The battalion, opposed to elements of Grenadier-Regiment 916 (352. Infantry Division), arrived at the following day, June 8, at 5:30. Lieutenant-Colonel Daniel reported the presence of enemies (infantrymen and artillerymen) In Tour-en-Bessin and the 26th Infantry Regiment (IR) immediately made the request for air support: shortly before 9 am, the air raid was launched over the village. An armored patrol is then sent to reconnoitre the effects of the attack: at 1140, the commune of Tour-en-Bessin is declared “clear”.

The 26th IR, commanded by Colonel John F. R. Seitz, organized his three battalions before launching his offensive on Tour-en-Bessin. Reinforced by tanks from the 635th Tank Destroyer Battalion, the 2nd Battalion supports the assault conducted by Lieutenant-Colonel John T. Corley’s 3rd Battalion starting at 8:40 pm, which is also supported by the Sherman tanks of C Company, 745th Tank Battalion. The Corley Battalion is advancing in the village on two columns of infantrymen who have integrated the Shermans. Several exchanges of shots took place but the Germans folded towards the east and the south. Tour-en-Bessin is fully secured shortly after midnight on 8 June 1944.

The 3rd battalion then proceeds to the hamlet of Sainte-Anne which is reached at 1:30. 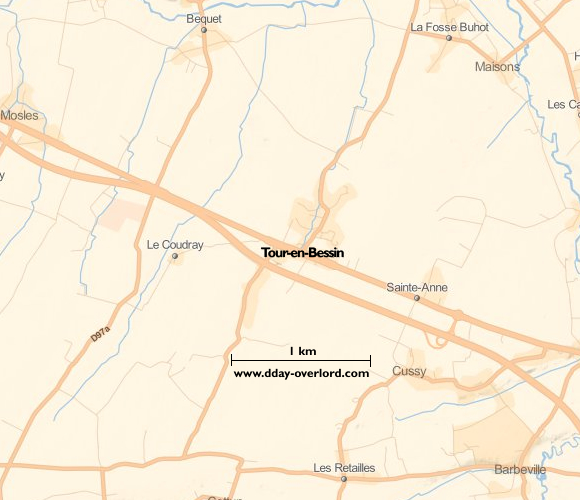