Trévières in 1944 – Calvados – Battle of Normandy

In the spring of 1944, the village of Trévières houses the command post of Grenadier-Regiment 916 (352. Infanterie-Division) commanded by the Oberst Ernst Goth.

Early in the afternoon on June 8, 1944, the 1st and 3rd battalions of the 18th Infantry Regiment (1st Infantry Division) set up a ban against Trévières. The regiment, commanded by Colonel George Smith, Jr., was opposed to elements of Grenadier-Regiment 916. During the hours that followed, the village was heavily bombed by Allied naval artillery. In the evening, the 38th Infantry Regiment (2nd Infantry Division) commanded by Colonel Walter A. Elliot landed on Omaha Beach and, once constituted, was sent directly to Trévières.

The progression is particularly slow, slowed down by the opposing snipers. The 38th Infantry Regiment (IR) reached the northern outskirts of Trévières only at the end of the day on June 9: the enemy was firmly installed and rejected all attempts to approach. C battery of the 81st Chemical Weapons Battalion in reinforcement of the regiment gets in position and opens fire on the German defenses all around the village. Shots are also made by the 15th and 38th Field Artillery Battalions. The 2nd battalion of the 38th IR commanded by Lieutenant-Colonel Jack K. Norris and attacked to the north managed to infiltrate and reach the first settlements, fighting inside Trévières during the night.

On the morning of June 10, Norris continued to exert intense pressure on the German defenders, who gradually retired outside the village. Shortly before 7 am, a new artillery fire strikes Trévières and the Americans launch the final assault at 8 am: 45 minutes later, the town is definitely under control. 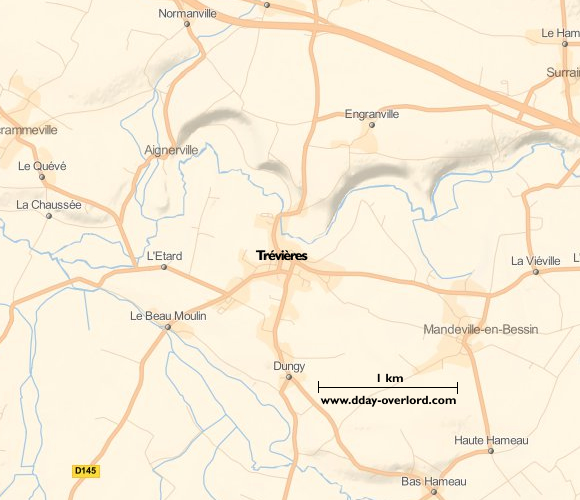