The commune of Troarn in the Calvados is located south-west of the marshes of the Dives. The Germans who occupy the area belong to the 5th Panzergrenadier-Regiment 125 of the 21. Panzer-Division, they installed their command post headed by the Oberleutnant Brandenburg in Troarn.

The Allies wanted to secure the left flank of their bridgehead by destroying several bridges over the Dives and Divette rivers and then retreating to the compulsory crossing points by firmly holding them against any German counter-attacks. The 3rd Para Brigade of the 6th Airborne Division was responsible for this mission in the early hours of 6 June 1944. The 3rd Parachute Squadron Royal Engineers commanded by Major Tim Roseveare received several destruction missions in the Dives marshes and one of Its objectives is a bridge located in Troarn. Major Roseveare must be parachuted at 12:58 am on the drop zone coded “K” by the Allies, located north of Touffreville.

The parachutages do not proceed as planned and many sappers lose their equipment, are disoriented on arrival or drown in the marshes. Major Roseveare is parachuted by mistake into the “N” drop zone located near Ranville, nearly seven kilometers from his target. He quickly realizes that to accomplish his mission in time, he must improvise in an emergency. At 2:30 am, when he managed to gather 47 of his sappers and was reinforced by paratroopers of the 8th Battalion Parachute Regiment, Roseveare progressed on foot in the direction of Troarn and reached Escoville without any hindrance. At 4 am he met a group of paratroopers of the 8th Battalion who owned a Jeep with his trailer of the Royal Army Medical Corps led by Lance Corporal Young. Roseveare then developed a bold raid: he had the medical equipment contained in the vehicle removed and carried 900 kilos of explosives, 45 detonators, a lieutenant and seven sappers. The paratroopers then take the road to Troarn but the Jeep remains blocked for twenty minutes after crossing a network of barbed wire.

Two soldiers are sent to illuminate the road to the outskirts of Troarn: they see a German soldier who is shot down by the Sten machine gun. The sound of the firing alerts all the soldiers in the village. Roseveare decides to try everything for the whole, although his Jeep, heavily loaded, can not exceed 50 kilometers per hour. Crossing the main street of Troarn at full speed under heavy fire which can trigger the detonators at any time, they reach the bridge and the sappers immediately go to work. In a hurry, the sapper Peachey fell from the trailer and was taken prisoner by the Germans. Luckily, the bridge was not guarded and five minutes later, around 5 am, the British blew up the loads, which cut a large hole in the middle of the bridge but did not destroy it completely. The soldiers immediately retreated towards Le Mesnil.

At around 3 pm, Captain T. R. Juckes, at the head of the No. 2 Troop of the 3rd Parachute Squadron Royal Engineers, crossed Troarn to try to blow up the bridge. He detonated the charges which increased the extent of the damage and then folded back.

During the following weeks Troarn remained in the hands of the Germans and it was not until the launch of Operation Goodwood, launched on 18 July 1944, that the situation evolved. The Allies launched a major offensive to capture the city of Caen by the east and the 3rd British infantry division was responsible for a large bypass in the direction of Troarn. But the English stopped the progression on July 20, in the immediate vicinity of the village. It was not until Paddle in August 1944 that the commune fell into the hands of the Allies. This offensive directed towards the Seine began on the night of 16 to 17 August, and it was No. 41 Royal Marine Commando (4th Special Service Brigade) commanded by Lieutenant-Colonel TM Gray who seized Troarn on 17 August 1944 , without major fights.

19 July 1944: A Universal Bren Carrier is advancing near a SdKfz 250 vehicle destroyed near Troarn during Operation Goodwood. Photo: US National Archives. 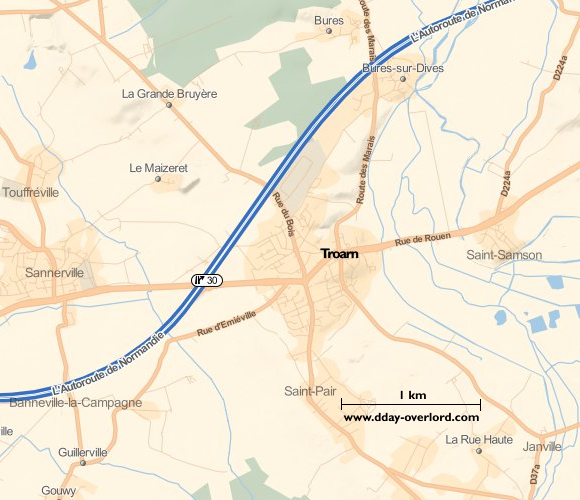