Varaville in 1944 – Calvados – Battle of Normandy

In the early hours of 6 June 1944, the town of Varaville was at the heart of the fighting of the 6th British Airborne Division in Operation Tonga.

To the east of Varaville, the bridge over the Dives must be destroyed by the Canadian paratroopers under the command of Sergeant Davies belonging to company C of the 1st Canadian Parachute Battalion (3 Para Brigade) in order to prevent the Germans from moving their troops on D-Day and the following days.

The paratroopers reached Varaville at one o’clock in the morning and were faced with the opposition of elements of Grenadier-Regiment 736 belonging to the 716. Infantry Division. Still, Sergeant Davies and his men managed to secure the approaches to the bridge at dawn with the help of sappers belonging to the 3rd Parachute Squadron RE. At 8:30 am on D-Day, they blew up the bridge and then folded west towards Ranville.

From 6 June to August 1944, and despite this allied intervention on D-Day, Varaville remained under the control of the Germans. The latter, reinforced by the 346. Infanterie-Division as of June 7 (with an evening counter-attack by the Kampfgruppe – task force – Hartman including Grenadier-Regiment 857) evacuate the inhabitants from the second half of July 1944. On both sides of the front line, numerous patrols inform about the opposing positions despite the losses caused by artillery and skirmishes. All the German counter-attacks directed towards the Orne river break under the shells fired by cannon, howitzers and allied mortars.

On 17 August 1944, more than two months after D-Day, the British launched Operation Paddle in the direction of the Seine. English soldiers of Commando No. 3 belonging to the 1st Special Service Brigade (3rd Infantry Division) seized Varaville during the early hours of the offensive, despite the large number of obstacles, mines and traps installed by the Germans. 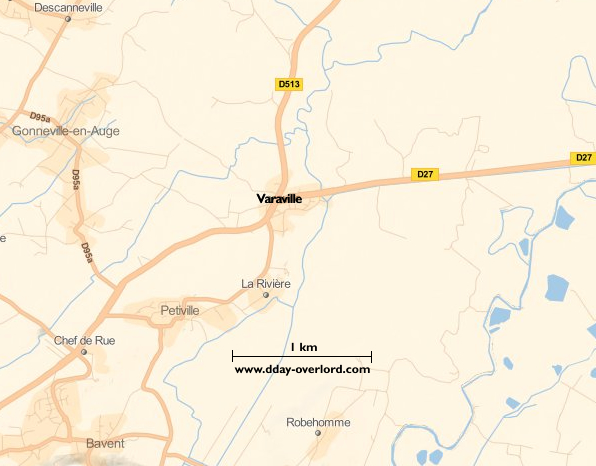