The commune of Verrières is located on a high point called the crest of Verrieres and which overlooks the area between Caen and Falaise. Defended by elements of the 272. Infantry Division, the Allies plan to seize it with the launch on 18 July 1944 of Operation Atlantic but German artillery put an end to the offensive in this sector.

On July 24, 1944, the Allies launched Operation Spring, which aims to capture the heights of Verrières Ridge: the village must be assaulted by the Royal Hamilton Light Infantry (4th Infantry Brigade, 2nd Infantry Division) while being supported by the 2nd Anti-Tank Regiment positioned at the Troteval farm.

After a major bombardment that took place on the night of July 24-25, the Royal Hamilton Light Infantry Regiment, commanded by Lieutenant-Colonel J. M. Rockingham, began its advance at 4 am. They reached the outskirts of the village of Verrieres under an extremely fierce fire and seized it at 7.50 am. The Canadians are strengthening their positions in support of the Royal Regiment of Canada (4th Infantry Brigade) in the direction of Rocquancourt. But at 1800 hours the Germans launched a major counter-attack: the Kampfgruppe (joint battle group) Meyer belonging to the SS Panzer-Division “Hohenstaufen” was directed towards Verrieres. It consists of Panther and Panzer IV tanks, a Panzergrenadier battalion, an aerobatics engineering company and a battery of 88 mm guns.

The salvation of the Canadians was due to the tanks of the 1st Royal Tank Regiment (22nd Armored Brigade, 7th Armored Division) and the 181 and 182 Squadron Typhoon IB fighter bombers belonging to 124 Wing, No. 83 Group , 2nd RAF Tactical Air Force which by their action push back the German tanks.

The front line did not evolve for more than a week in spite of constant bombing and it was not until the launch of Operation Totalize on August 7, 1944 that their defensive system finally advanced towards the south. The Canadians of the South Saskatchewan Regiment (6th Infantry Brigade, 2nd Infantry Division) begin their offensive from Verrieres and head for Rocquancourt at the dawn of August 8th. 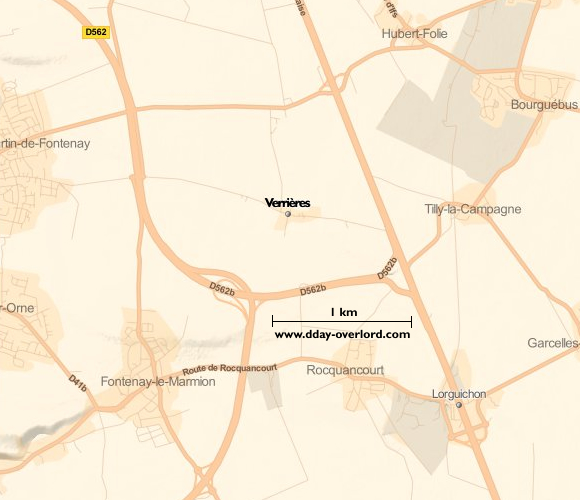