Vierville-sur-Mer in 1944 – Calvados – Battle of Normandy

The village of Vierville-sur-Mer and its beach are defended by four strongpoints coded from Wn 70 to Wn 73. A valley allows crossing the plateau to access the beach.

In the spring of 1944, when the Allies were preparing for the Normandy landing, the Americans defined two beach areas facing Vierville-sur-Mer, which were named Charlie and Dog Green from west to east. These areas represent a front of about 1,200 meters wide. They also give a code name to the valley which becomes “D-1”. Company A commanded by Captain Taylor N. Fellers of the 116th Infantry Regiment (29th Infantry Division) would formed the first assault wave with Company C (Captain Ralph E. Goranson) of the 2nd Rangers Battalion. The Germans stationed at Vierville-sur-Mer belong to the 5th Company (commanded by the Oberleutnant Hahn) of Grenadier-Regiment 916 (352. Infanterie-Division) as well as to the 11th company of Grenadier-Regiment 726 (716. infantry Division). If the Rangers landing at Pointe du Hoc failed to storm the battery at 7 o’clock, the 5th Ranger Battalion must be immediately diverted to Dog Green.

On June 6, 1944, at 1 am, the landing ships en route to Omaha Beach arrived in sight of the coast and stopped the progression 23 kilometers from the shore. German sentries spot the dark masses on the water but fail to identify them. Several Allied aerial bombardments strike the sector but without touching the defenses. Shortly after 5.10, the warships in front of Omaha belonging to Task Force O opened fire on the German positions. 29 Sherman amphibious tanks coded “Duplex Drive” belonging to the squadrons B and C of the 743rd Tank Battalion are launched but only 3 of them do not flow: the swell is far too strong for the amphibious device of these special tanks. It was then decided that the Landing Craft Tank (LCT) transport barges carrying the B Company tanks would land the tanks directly on the beach, taking the risk of losing the vessels: one of the LCTs carrying B Company commanding officer is sunk, 4 officers are killed or wounded. Nevertheless, 8 of the 16 tanks managed to land.

The first assault wave hit Normandy at 6.35 am. Silent until then (not to be spotted by the Allied naval gunners), the German defenses opened fire when the soldiers had water to the thighs. A deluge of steel and fire defeated the Americans who instantly recorded very high losses. In just a few minutes, 90% of the first wave of assault is decimated. Company A of the 116th Infantry Regiment (116th IR) is pinned down to the ground by precise crossfire. A mortar shell directly touches a landing craft, killing all its passengers; Boats are blocked by sandbanks and infantrymen pass overboard to land, but most of them drown because of the weight of their equipment. Dozens of soldiers are killed trying to cross the beach: Captain Taylor N. Fellers is also falling. All the officers are affected, and most of the sergeants too: the soldiers are left to their own, without leaders. When 64-strong C company of the 2nd Rangers Battalion was approaching the beach west of the D-1 exit, Captain Goranson’s barge was hit and a dozen men were killed. The other barge (Landing Craft Assault, LCA) is caught under a machine gun when the ramp drops: 15 Rangers are killed when landing. The Rangers, just seconds after their engagement in Omaha Beach, have already lost 50% of their strength.

Company B commanded by Captain Ettore V. Zappacosta of the 116th IR lands at 7 o’clock on Dog Green and is immediately pinned down by the deadly shots of the opponent. The landing barge of Zappacosta is riddled with impacts before it is even lowered: soldiers hoist on port and starboard, but many of them are hit by machine gun bullets: Captain Zappacosta is killed in turn. He was replaced by Lieutenant William B. Williams. Captain Berthier B. Hawks’ company C arrives at 7:10.

In accordance with the plan of attack, the 5th Ranger Battalion commanded by Lieutenant-Colonel Max F. Schneider is diverted to Dog Green as the men of Colonel Rudder did not report their situation at Pointe du Hoc. But as the shore approaches, Schneider observes the beach area and realizes that any landing at this place is impossible: he moves east and finally lands at the eastern edge of Dog Green: on the 450 Rangers of his unit, 6 personnel are shot by crossing the beach.

Some survivors of company C of the 2nd Rangers climb the cliff facing Charlie, guided by 1st Lieutenant William D. Moody, reaching a fortified German strongpoint (Wn 73) at 7:30 am. Captain Ralph E. Goranson immediately sent them the remaining Rangers as well as elements of Company B of the 116th IR. For several hours, they attacked a house transformed into a real fortress by the Germans (known as Villa Gambier): they stormed the position several times but the opposing reinforcements never stop flowing.

From 8 am to 8.30 am, the top of the plateau of Vierville-sur-Mer is reached in several places by small groups of isolated soldiers, especially east of Dog Green from the Dog White area. The 5th Ranger Battalion infiltrated Vierville-sur-Mer, accompanied by elements of Companies B and C of the 116th IR. The platoon of Lieutenant Charles H. Parker, Jr. of the 5th Ranger Battalion leads the way, reaching Vaumicel Castle to the south of Vierville, where he stays for the rest of the morning. Meanwhile, USS Carmick destroyer provided fire support for the advance of the infantry and tanks of the 743rd Tank Battalion in the Dog Green area. At 9 o’clock, nearly 600 men left the beach and reached the plateau. Other elements of the 5th Ranger were looking to advance south-east of Vierville but they were stopped by a strong defensive line that relied on rows of hedges. After 4 hours of hard fighting, they turned back and advanced towards the village of Vierville by taking the road that was recognized by company C of the 116th IR at 11 o’clock. The latter, with company B of the 5th Ranger, entered Vierville-sur-Mer by the east before noon: the Americans encountered several resistance points and seized them, forcing 14 German to surrender. They advanced westward towards Pointe du Hoc and were stopped 500 meters after the exit of the village by a German defense line. For several hours, they exchanged many shots without succeeding in piercing the front line.

From 12:00 am to 1:00 pm, the Allied Navy (including the USS Texas and the USS McCook) made a series of strikes on fortified strongpoint defending access to the D-1 exit, with shots being corrected from the beach by 116th IR artillery observers. The USS McCook reports by radio that the Germans seem to want to stop the fight: 30 of them are taken prisoner and escorted to the beach to be evacuated. General Norman D. Cota, second-in-command of the 29th Infantry Division, then reconnoitered the valleys along the road accompanied by five soldiers. Guided by five German prisoners, they wielded a few sporadic small arms fire and crossed a minefield. The engineers of the 121st Engineer Combat Battalion immediately set to work to clear the exit “D-1”. The valleuse is again available at 5 pm but the Americans do not have enough units to completely secure its access, as the losses are high.

An attack by the Rangers is scheduled at 5 pm west of Vierville-sur-Mer but is finally canceled. The command did not want to relaunch the offensive in the direction of Pointe du Hoc until the next morning and tried to secure the immediate vicinity of Vierville-sur-Mer.

On the evening of June 6, the Americans held small, very fragile positions, isolated from each other all around the village. They are covered by the naval support of the USS Texas which is able to carry out barrage shots against any opposing counterattack. General Charles H. Gerhardt, commander of the 29th Infantry Division, arrives in the evening and sets up his command post near the exit “D-1”: the Germans are only a few hundred meters to the south and west. In addition, they regularly infiltrate between Vierville and Saint-Laurent-sur-Mer.

On June 7, 1944, the village was run by four Rangers companies and armored vehicles. Around 10 am, the 3rd battalion of the 115th Infantry Regiment from Saint-Laurent-sur-Mer recognized the Port-en-Bessin road and carried out zone control missions in Vierville-sur-Mer, That there are no more Germans hidden in the commune, and then proceeds south towards Louvieres. The battalion was severely attacked and had to retreat, forming a line of defense, preparing to repel a possible German counter-attack. From 12:30 to 4:30 pm, the 175th Infantry Regiment (29th Infantry Division) commanded by Colonel Paul R. Goode landed as a reinforcement and crossed Vierville-sur-Mer before heading for Gruchy. In the afternoon, the 224th Field Artillery Battalion and the 227th Field Artillery Battalion landed in turn, greatly increasing the firepower of the division.

The village of Vierville-sur-Mer and the Valleuse “D-1” are heavily bombarded by the enemy artillery from 8 pm, causing considerable damage and disorder along the beach exit. The 110th Field Artillery Battalion, commanded by Lieutenant-Colonel John Purley Cooper, who had just landed, loses 17 men and 2 howitzers during the bombing. 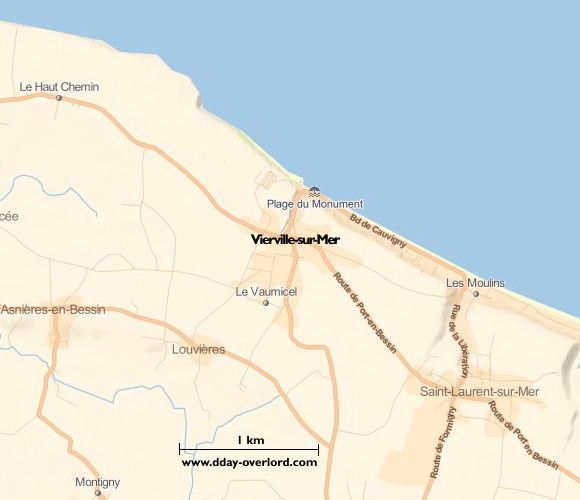