On June 6, 1944, the town of Villons-les-Buissons was one of the objectives of the North Nova Scotia Highlanders (9th Infantry Brigade) commanded by Lieutenant-Colonel Charles Petch. The regiment, which lost a lot of time and men during the landing, reached the northern outskirts of Villons-les-Buissons only at the end of the afternoon. Some soldiers of the second battalion of Grenadier-Regiment 736 (716. Infantry Division) retreated to the village, opposing no special resistance to the Canadian soldiers. Villers-les-Buissons is set to defend for the night.

The next day at dawn, the Canadians managed to seize the village, supported by the tanks of the Sherbrooke Fusilier Regiment (2nd Armored Brigade), and then proceeded to Buron under fire from the 716. Infanterie-Division and the 21. Panzer-Division.

Starting July 13th, the engineers of the Royal Engineers 25th Airfield Construction Group began the construction of an aerodrome called ALG B-16 on land polluted by numerous mines and other relics of fighting. If the works are officially completed on 20 July 1944, they shall continue until 10 August. This airfield serves as the base for 132 Wing (No. 83 Group), which is armed by two squadrons of Norwegian volunteers serving in the Royal Air Force. 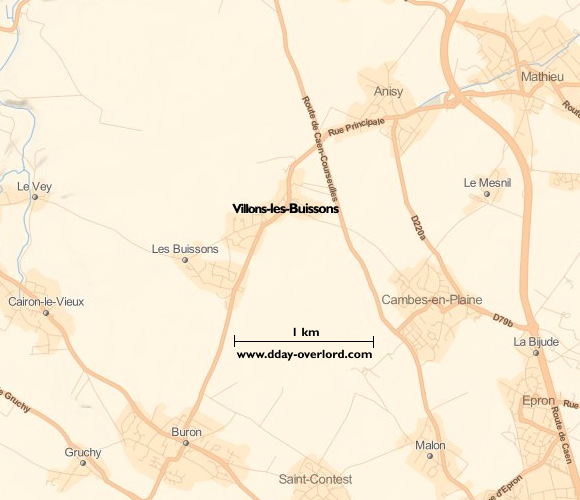