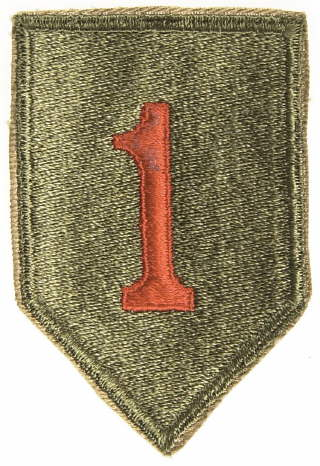 Creation of the 1st Infantry Division

The 1st Infantry Division was founded in June 1917. It is the first US infantry division to be created to fight German forces during the First World War. It is made up of 4 regiments of infantry, 3 regiments of artillery as well as a set of smaller units. In total, this division has nearly 28,000 men. It performed its baptism of fire on November 3, 1917.

On the front in Picardy, north of Paris, the 1st Infantry Division attacks on 28 May 1918 the German trenches as part of the battle of Cantigny. For several days, the fighting is raging and the losses are terrifying: nearly a thousand American soldiers are put out of action, and the victory – the first for the Americans in Europe – comes back to them.

When the 1st American Infantry Division was gathered on May 15, 1942, it had nearly 15,000 soldiers to its credit. Its first battle of the Second World War took place in Operation Torch on November 8, 1942. Allied forces organized for the first time a large-scale landing near the town of Oran, Algeria.

The 1st Infantry Division, nicknamed “Big Red One” in connection with the Division Badge, fights in Tunisia and participates in the invasion of Sicily in July 1943.

The “Big Red One” is called in England where it is to prepare Operation Overlord. Indeed, the 1st Infantry is in charge of the assault on Omaha Beach, with the 29th division of infantry.

On June 6, 1944, under the command of Major General C. Ralph Huebner, the 16th regiment of infantry lands at 6:30 in Normandy in front of the locality of Colleville-sur-Mer. But the German resistance is extremely strong and the Americans are on the brink of disaster. The losses are huge, 95 per cent of the officers were killed and no one has landed where he should be.

But the veterans of North Africa do not demotivate and force the Atlantic Wall, guarded by the 352nd German infantry division. Colonel George A. Taylor, commanding the 16th Infantry Regiment, standing on the beach, yelled at his men a phrase that went into the story: “There are two kinds of people who are staying on this beach: those who are dead and those who are going to die. Now let’s get the hell out of here.“

After the Normandy landings and the Battle of Normandy, the 1st Infantry Division participated in the liberation of the city of Liège, in Belgium and pushes back the German forces behind the Rhine. It crosses the Siegfried line and then attacks the German city of Aachen which surrenders on October 21, 1944.

But on December 16, 1944, the Germans launched their last forces as part of Operation Nordwind and counter-attacked in the Ardennes forest. Located in Bullingen, the 1st Infantry Division defends its positions by inflicting heavy losses on the German forces.

On January 15, 1945, the American situation in the Ardennes improved and the Allied divisions counter-attacked in turn. The 1st Infantry Division crossed the Siegfried Line reoccupied by the Germans and set up a bridgehead in the Remagen area.

On April 8, 1945, the Big Red One entered Czechoslovakia after crossing the Weser River. It is his last action of the Second World War. It served as a division of occupation in Germany until 1955 before returning to Fort Riley (USA).

21 023 soldiers of the 1st Infantry Division were put out of action throughout the duration of the Second World War.

In July 1965, the 1st Infantry Division participated in the Vietnam conflict by landing at Cam Ranh Bay and Vung Tau. The division was transferred during the Cold War in Germany (where it is still based today) and returned to the battlefield during Operation Desert Storm in 1991.

In 1996, elements of the Big Red One participated in the peace-making operations in Bosnia as well as in Kosovo in 1999 as part of the Joint Guardian peacekeeping operation. The 1st Infantry Division participates in the conflicts in Afghanistan and Iraq (as of 2003).