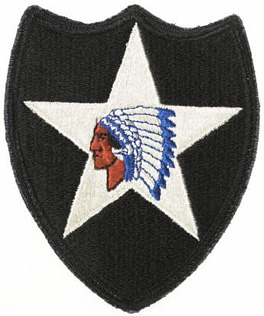 Creation of the 2nd I.D.

The division was born on September 21, 1917, in preparation for sending American troops to the battlefields in France during the First World War.
On October 26, 1917, when it was composed of three infantry brigades, it was deployed at Bourmont in France. Unique in US military history, the division is twice commanded by a General of the Marine Corps.

The 2nd Infantry Division, trained by French soldiers in the trenches during the winter of 1917-1918, was deemed operational in the spring of 1918 and carried out its baptism of fire in the Bois de Belleau, then participated in the campaign of Château- Thierry. On July 28, 1918, Major General Lejeune took command of the division. It participated in the offensive of the Meuse and was used as army of occupation on the German territory until April 1919 before returning to the United States. The division is awarded three times the French War Cross.

After the United States entered the war in 1941, the 2nd Infantry Division (nicknamed “Indianhead”, head of Indian, because of its insignia) leaves the port of New York towards Belfast on October 8, 1943 And arrived in Northern Ireland nine days later. She then arrives in England where she begins her training to fight the Germans in Europe.

Attached to the 1st American Army, she landed in Normandy on June 7, 1944 in Saint-Laurent-sur-Mer on the beach of Omaha and immediately began the fighting. Commanded by General Robertson, the division freed the village of Trévières on 10 June 1944 and then the forest of Cerisy before seizing and defending the 192, commanding the road to Saint-Lô. It crosses the Vire and then penetrates Brittany in August 1944 when it is the seat of Brest.

On December 11, 1944, the 2nd Indianhead was ordered to seize the barriers on the Roer as part of the Battle of the Hürtgen Forest. Following the German counter-offensive in the Ardennes, the division was forced to withdraw to Elsenborn before resuming the offensive from February 1945 onwards. It seized Gemünden on 4 March 1945, reached the Rhine on 9 March and then Breisig on 10 March before assuring custody of the Remagen bridge from 12 to 20 March 1945.

After crossing the Rhine on 21 March, the division seized many German cities such as Göttingen on 8 April, Merseburg on 15 April and Leipzig on 18 April. It reached the Czech frontier on 4 May 1945: on 8 May, the date of the Allied victory in Europe, it was the seat of Pilsen.

The 2nd Infantry Division then returns to the United States and resumes training in Texas from July 22, 1945 until its projection in Japan. But the Japanese signed the armistice before the division was deployed. 3,031 soldiers of the division were killed in action during the Second World War, 457 died as a result of their injuries and 12,785 were wounded.

The division moved to Fort Lewis, Washington, on April 15, 1946. It was alerted after the events of the summer of 1950 in Korea, it was the first American unit to be deployed in Pusan ​​on July 23 of the same year year. The fighting began on 31 August 1950 with a difficult battle of 16 days.

Pushing back the opposing forces north of Pusan, the division is engaged in the battle of the Ch’ongch’on River and near Kunu-ri where it loses nearly a third of its troops. The 2nd Indianhead repulsed the Chinese forces in February 1951 during the battles of Chipyong-ni and Wonju before resuming the offensive.

The Chinese offensive of spring, which spreads from April to May 1951, is stopped by the division and receives the Presidential Unit Citation. Subsequently, she is engaged in the battle of the bloody banks and Crèvecoeur. She returned to the United States in 1954.

7,094 soldiers of the division were killed in combat during the Korean War. 338 died as a result of their injuries, while 16,575 were injured.

Reorganized in the spring of 1958 in Fort Benning, Georgia, the division improved its training before returning permanently to Korea in July 1965 to ensure security in the region. On November 2, 1966, soldiers belonging to the 21st Regiment of the 2nd Infantry Division were killed by North Koreans in an ambush. The following year, 16 US soldiers were killed in the demilitarized zone. In 1969, four additional soldiers were killed. On August 18, 1976, two officers of the division were beheaded by North Korean guards.

The 2nd Infantry Division is deployed in Iraq as part of Operation Iraqi Freedom in August 2004 in the region of Fallujah and then Ar-Ramadi, where it suffers many casualties. The 3rd Combat Brigade on Stryker is deployed in Ninewa province from June 2006 to September 2007 and units from the 2nd Indianhead carry out various missions until 2009.

The division is also deployed in Afghanistan, particularly on 17 February 2009. 35 soldiers are killed during this mandate and 239 others are wounded.