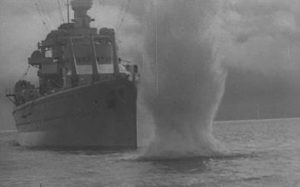 At the origin of the Battle of Ushant

After the launch of operation Neptune, which consisted of the air and naval transport of allied forces from England to Normandy, the Germans lost control of the air and its maritime space. Several hundred allied warships prevented any adverse intrusion that might hamper the operation of operation Overlord and then the beginnings of the Battle of Normandy.

For the Germans, it is necessary to react in order to counter this naval military power which is a true bridge linking the southern coasts of England to the Norman beaches. A counter-offensive is set up directly after D-Day, and concerns the 8th fleet of destroyers commanded by Vice-Admiral Theodor Krancke, then at anchor near the coast of Gironde. Type 36A ships are  rdered, on 6 June 1944, to make their way to Brest. Three destroyers form the squadron: ZH1, Z24 and Z32.

But the British intercept and decode the German transmissions: allied bombers are deployed to attack these buildings in the Bay of Biscay. They damage the destroyer-Admiral Z32 which has to be repaired in Brest. The squadron was reinforced on 8 June by the T24 ship, formerly belonging to the 4th squadron of torpedo launchers under the command of Theodor von Bechtolsheim. On the same day they set out for the English Channel and the Allied ships, having reinforced their anti-aircraft capabilities.

Conduct of the Ushant Raid

Once again, the Allies intercept German transmissions. They then send the 10th British squadron of destroyers, commanded by Captain Basil Jones, to stop this maritime raid outside the sensitive zone in which they evolve in favor of the land battle in progress in Normandy. Allied warships are divided by Jones into two entities: the 19th division (HMS Eskimo, HMS Javelin and the Polish ships ORP Piorun and ORP Blyskawica) and the 20th division (HMS Tartar – where Jones is based), HMS Ashanti and the Canadian ships HMCS Haida and HMCS Huron).

On the night of 8-9 June 1944, the British squadron, which was then west of the Cotentin Peninsula, advanced towards the Breton coast. Allied radar detected the presence of German warships at one o’clock in the morning, thirty miles north-east of the Island of Batz. The engagement begins immediately and all the ship’s armaments are used in the naval battle: the 20th division attacks ZH1 at close range. Severely damaged by a torpedo from the H.M.S. Ashanti, Captain Klaus Barckow’s ZH1 starts to sink and explodes at 02:40 am. Canadian vessels hunted Z24 and T24 who escaped through an area mined by the British.

When H.M.C.S. Haida and H.M.C.S. Huron returns to the meeting point initia, they discover on the way the Z32 ship of Bechtolsheim, already hit several times. The warships had the greatest difficulty identifying themselves at night, but the Canadians first discovered the identity of the ship advancing at a rapid pace in front of them: they opened fire on Bechtolsheim and inflicted new damage. Finally, the Z32 tries to escape but runs aground on the island of Batz.

Conclusion of the Ushant battle

In the end, the naval raid organized by the Germans failed before they could even worry the Allies. The latter, enjoying both a favorable balance of power (eight destroyers against four) and the work of the Ultra machine to decode the opposing transmissions, destroy the strength of Bechtolsheim.

If a British destroyer is damaged, the Germans lose two: ZH1 is sunk, and Z32 is stranded. The captain of ZH1, Barckow, was killed in the attack of his destroyer along with thirty-eight other crew. Twenty-eight sailors were able to swim or board ships while the British made one hundred and forty prisoners.

The Germans, conscious of their numerical inferiority in this battle, no longer attempt from this episode to infiltrate into the Bay of the Somme as they sought to do on June 9, 1944.

Back to the German operations menu