The embarkation of the Allied troops 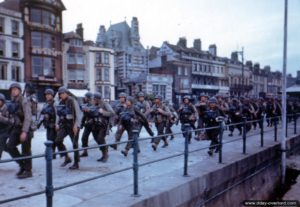 The 2nd (US) Ranger Battalion en route for embarkation on the Weymouth harbor.
Photo: US National Archives

The process of embarking on board transport ships

The launch date for Overlord operation changed several times. Originally planned to begin on the 1st of June 1944, General Eisenhower made the decision on 8th May to postpone its start until the 5th of June.

Then, because of the storm that broke out in the English Channel, it delayed the operation for another twenty-four hours. There were no consequences of these modifications for the equipment: ammunition, vehicles, fuels and spare parts had already been loaded on board transport ships in British ports. On the other hand, the situation was different for the troops.

At the end of May 194, soldiers participating in the invasion of the “European fortress” joined assembly areas where they were forbidden to make any contact with the outside world. They received the additional material necessary for the accomplishment of their mission and the quality of the meals served improved considerably.

Then, as of May 26th for the British-Canadian forces and May 30th for the American forces, they were redirected from the assembly areas to nineteen embarkation points. It is at this moment that the soldiers boarded the transport ships and started waiting.

The military is accustomed to the expectation that is part of their job. But this time it was not a question of waiting for an umpteenth exercise or a review, this was waiting for war. For many soldiers, Operation Overlord represented the baptism of fire, and anxiety setted in fast.

On board ships, officers received additional information on their mission and they discovered names of towns and villages that until then were camouflaged or coded. The units discovered their objectives and this silenced all speculation: Overlord will take place in Normandy.

If leaders are occupied by the preparation of the mission and hold rehearsal meetings with the troop as often as possible, soldiers wait in confined spaces where they are piled on top of each other. This long wait is a first test for their nerves and the postponement of Overlord from June 5 to 6 did not help. Many men also suffered from seasickness.

For paratroopers and airborne troops, the expectation was the same. The new deadlines ordered by Eisenhower allowed the mechanics to check again the planes and the bombers charged to take action over Normandy.

The decision to start Overlord

If General Eisenhower wished to postpone the launch of Overlord for a few more days or weeks, he had two options: to leave troops on board the boats while waiting for a more favorable moment, or to redeploy them in the direction of assembly areas. But the team of meteorologists led by James Stagg reported to the Supreme Allied Commander that the climate was favorable on June 5th for forty-eight hours.

After making the decision at 4:30 on June 5 to begin Operation Neptune in the evening, Eisenhower visited his troops and distributed to the unit under his orders his famous great Crusade message. He traveled to the Portsmouth area during the day to encourage the British soldiers and then visited the American paratroopers of the 101st Airborne Division (whose losses were likely to be particularly high). At the end of the evening of June 5, the Allied ships made their way to the beaches of Normandy while the planes took off towards the drop zones. The Normandy landings can begin.

Back to the Allied Armada menu