History of the Kriegsmarine – German Navy – in Normandy in 1944 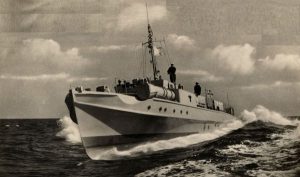 A Schnellboote (torpedo boat) of the German Kriegsmarine.
Photo: Bundesarchiv

Distribution of the Kriegsmarine in Normandy

The term Kriegsmarine (German navy) refers to both the surface and submarine units of the Third Reich armed forces as well as the coastal artillery batteries. In the spring of 1944, the Kriegsmarine in Normandy was led by two different commands: in the west, Admiral Walter Hennecke (based in Cherbourg), whose sector was from the Bay of Mont-Saint-Michel to the mouth of the Orne, and to the east the sector of Rear-Admiral Henning von Tresckow (based in Le Havre), whose sector was from the mouth of the Orne to the Somme region. German naval forces positioned along the Channel coast were placed under the command of Admiral Friedrich Rieve, whose command post was located in Rouen.

The main ports used by the Germans in Normandy were located in Cherbourg, Le Havre, Ouistreham, Port-en-Bessin, Grandcamp-Maisy and the Channel Islands.

Kriegsmarine against the Allies on D-Day

The historic storm that had been in full swing in the Channel since the beginning of June 1944 did not allow the Kriegsmarine to patrol on the days preceding the launch of Operation Overlord. When the allied armada was heading towards the Normandy coasts, the German warships were docked.

In the early hours of June 6, 1944, the numerous messages indicating the presence of paratroopers in Normandy as well as an allied fleet in motion off the Pas-de-Calais (diversion maneuver orchestrated by the Allies within the framework of Operation Fortitude worried Admiral Krancke, Commander-in-Chief of the West Naval Group (Marinegruppe West) from his command post. He then ordered the fleet of the Channel coast to be placed on alert at three o’clock in the morning, but at that moment the Allied armada was already off Normandy, awaiting daybreak to open fire.

On the coast, the Kriegsmarine artillerymen spotted dark silhouettes at night from the horizon: the flares fired to request the identification of these ships did not receive any answer. In Port-en-Bessin, the radar listening station spotted echoes from the open sea, indicating the presence of vessels at anchor: the 6th gunboat fleet (6. Artillerieträger-Flottille) was deployed but was silenced by the shots of the allied armada.

Patrols were deployed from Le Havre and Cherbourg, such as the 4th and 5th flotilla of torpedo boats as well as the 15th patrol fleet: passing through the smoke curtain set up by the precursors of the allied armada, they discovered the Allied warships and turned back, after firing their torpedoes.

To the east of the armada off Ouistreham, the Norwegian destroyer Svenner was sunk by one of the eighteen torpedoes shot by the three Schnellsbootes (S-Boote) of the 5th flotilla of torpedo boats coming from Le Havre : thirty-two Norwegian and British sailors were killed in the attack.

The coastal artillery batteries were under from fire the allied armada throughout D-Day. While the batteries in the Cotentin Peninsula (Azeville, Crisbecq) managed to record direct hit on American warships, the others were destroyed by the differents bombings, unable to fire (such as Pointe du Hoc battery) or quickly under allied control. The battery at Longues-sur-Mer remained in operation from June 6 until late afternoon, but the British captured it the following day, along with the 184 soldiers in charge of its defense.

For the Germans, it was necessary to react in order to counter this naval military power which was a true bridge linking the southern coasts of England to the Norman beaches. A counteroffensive was set up directly after D-Day, which involved the 8th fleet of destroyers, at the anchorage near the coast of Gironde (led by Admiral Krancke). Its warships were Type 36A which were ordered, on 6 June 1944, to make their way to Brest. This naval raid, called the Ushant raid, failed on June 9, 1944, even before it could worry the Allies. The latter, enjoying both a favorable balance of power (eight destroyers against four) and the work of the Ultra machine to decode the enemy transmissions, destroyed this German maritime force.

The coastal batteries defending Cherbourg’s maritime ports (in particular the Hamburg battery) continued to defend the port area against allied warships until the end of June 1944, in particular during the afternoon of the 25th June during which long duels took place. But these imposing fortresses did not prevent the fall of the city in the hands of the Allies on July 1st.

Following the failure of the Ushant raid, the Kriegsmarine was planning to take action at night and on an ad hoc basis, because joint work between the surface units and the air forces of the allied countries prevented any coordinated action by their opponents. During the month of July, some warships attempted unsuccessful offensives, apart from the destruction of a few landing crafts and LS.T. (Landing Ship Tank).

In August 1944, the Germans adopted a new tactic by deploying the K-Verband divers in the eastern part of the Bay of Seine near the ports of Fécamp, Honfleur and Houlgate. These German commandos, equipped with Neger torpedoes, Marder pocket submarines and Linsen explosives, carried out eight attacks which did not worry the Allied armada.

Unable to continue the fight off the Normandy coast, the Kriegsmarine was then withdrawn from the Bay of Seine and redeployed as of August 23 in the ports of Germany and the Netherlands. The impact of its general action in Normandy against the Allied maritime forces was almost nil.