Origins of the Normandy landing – Battle of Normandy – 1944

From combined operations to the Tehran conference

The creation of the “combined operations” 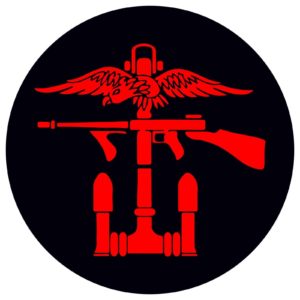 The insignia of British Combined Operations during the Second World War, connecting the three armies: land, air and sea.

The British Prime Minister, Winston Churchill, was convinced that the only means to beat the Germans was to fight the war on the French soil itself.

To bring the mission to a successful conclusion, three points were laid down : first of all, it is necessary to start a military operation from the Great-Britain island itself, in order to definitively put aside the menace of a German invasion on the British territory.

Then, the British army, extremely weakened by the beginning of the conflict, needed to follow a new training and to receive new military equipments. The Allies also needed to take advantage from the extraordinary industrial and economical power of the United States of America.

In 1939, no army in the world had the experience of amphibious operations; the troops were not equiped with amphibious crafts and did not clearly realize the strategic stake of a landing operation.

The British Prime Minister wished the creation of  specialized assaults units (often refered as “commandos” today), which were to be operational as soon as July 1940. The first military action of such unit took place on the island of Guernesey.

In October 1941 Winston Churchill asked the young captain Lord Mounbatten to take the lead of the n”Combined Operations” with the following instructions : “You must prepare the invasion of Europe because we will never win this war unless we bring the war against Hitler on his own land“.

The Soviets call for help

The Soviets, facing a ferocious enemy on their own territory, asked for the help from the Allied forces : the Americans (who went to war after the Japanese attack on the island of Pearl Harbour, on the 7th of december 1941) and the British started sending them light and heavy equipments (tanks, aeroplanes, (arms, ammunitions, fuel) but it seemed to remain not enough for Staline.

After the turning point of the Battle of Stalingrad in 1942, the Red Army reconquered the territories which were lost during the previous fights. However, the situation remained extremely difficult for the soviet troops : Staline wanted to meet the Allied leaders in order to take as soon as possible essential military decisions.

In order to show that they are willing to help and to calm down Staline, the Americans made up an amphibious operation, called operation “Jubilee”. It was an amphibious landing near the town of Dieppe, France, on August 1942.

This attack would also give the Allies thousands of intelligence reports on the German Atlantik wall and its reaction. Its aim was not to win the war but to give as much information as possible on the German raction capacities.

The raid on Dieppe in August 1942 was led by the Canadian 2nd division, supported by the new 40 tons Churchill tanks, which had to land right in front of their objective, while the commandos were attacking on the sides to neutralize the coastal batteries installed on the cliffs. But the Royal Navy did not want to risk its large units in the English Channel, thus the attack was not preceded by a marine artillery bombardment.

Thus, the Canadians are hung on the beach exposed to the shootings and only some manage to cross the concrete dam and to infiltrate downtown.

Reinforcements which were to be sent to the combat, were not it because the Allies simply “tested” the Atlantic Wall. The enemy movements were observed, timed and analyzed in order to prepare an attack of greater scale later.

Canadian and British soldiers were sacrificed to allow the Allies to collect informations for a future greater scale landing.

Then, and for the first time, the three leaders of the Allied countries (Roosevelt, Staline and Churchill) met at Teheran in Iran in order to take military decisions against the Axis forces.

The meeting began on November 28, 1943 and ends on December 2nd. The Allied leaders decided to prepare a massive offensive which would allow them to open a second front on the European continent, but at first they did not now were exactly. For example, Churchill wanted to land in the Balkans. Theses talks accelerated the work of the allied soldiers working on the “Combined Operations” project. A thing was certain, the attack would be starting from England, for logistic reasons. It was then necessary to choose the exact landing area.

The Atlantic coasts are too far away and moreover, the German submarines, the famous U-Boot, are too dangerous. It is the same for the Brittany coasts, while the current near the Belgian beaches is too strong and would be likely to destroy a great number of boats, what represents an useless risk. As for the beaches of Holland, the grounds behind the beaches are flooded and do not facilitate the landing of material.

Back to the D-Day menu