Albert Blithe was born in 1923 and grew up in the suburbs of Philadelphia. After completing his schooling (in High School), he decided to join the army in early 1942. He volunteered for the paratroopers and then trained in the Easy Company at Camp Toccoa, where he successfully performs his basic training.

Wounded in Normandy in June 1944, Albert Blithe died in a hospital in Germany after a discomfort in Belgium in 1967. He was buried in the American military cemetery in Arlington, Pennsylvania.

In the “Band of Brothers” series, it is stated that Albert Blithe died in 1948 as a result of his injuries in 1944. His brothers in arms, having heard no more of him, simply believed that he had died three years after the end of the war in Europe. He died in 1967.

The character of Albert Blithe is interpreted in the series Band of Brothers by the actor Marc Warren (picture below). 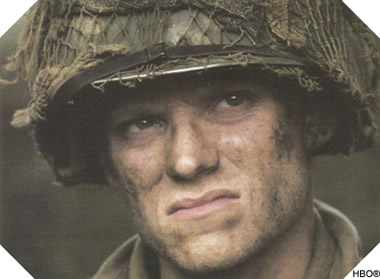