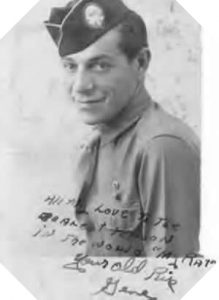 Eugene Roe was born in 1921 in Bayou Chene, Louisiana.

When he entered the airborne troops, it was planned to place him in one of the three medical companies for the Easy, although he had no medical experience at the time.

He finished his basic training in Toccoa, Georgia (USA). His bravery and dedication as a health auxiliary throughout the war has saved the lives of many soldiers.