Born in Los Angeles, “Buck” Compton is a baseball and American football player at the ULCA before joining a US Army officer school.

He trained at Camp Toccoa and joined the Easy Company in 1943 as 2nd Lieutenant in Aldbourne, England, where the Easy performs his final training before Operation Overlord.

Lynn Compton wrote her memoirs under the title Call of Duty, my life before, during and after the band of brothers. 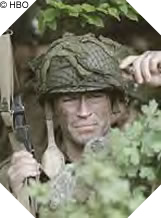