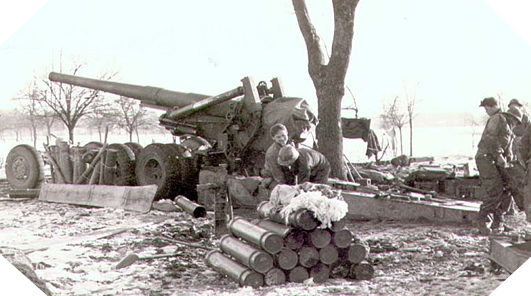 During the interwar period, the American army sought to build a powerful artillery, drawing on the lessons of the First World War.

In 1920, following the recommendations of the American commission for the study Westervelt Board, specialized in artillery, the first plans of a 155 mm long range gun were drawn. This project lasted until the 1930s, the engineers hesitating to place the barrel on a chassis.

In 1939, the first prototypes appeared under the name “T3 8in howitzer”. Modifications are made to the means of displacement of the barrel: it is installed on eight wheels, and finally takes the denomination M1.

Used in the various theaters of operations of the Second World War, it is deployed during the Battle of Normandy, where it offers its high firepower at long distance. It is nicknamed “Long Tom”.

After the war, it was modernized (model M4) and installed on a motorized chassis to improve its mobility (model M40). Appreciated for its reliability and firepower, it is sold to many nations such as Denmark, Greece, Japan, the Talia or even Austria.