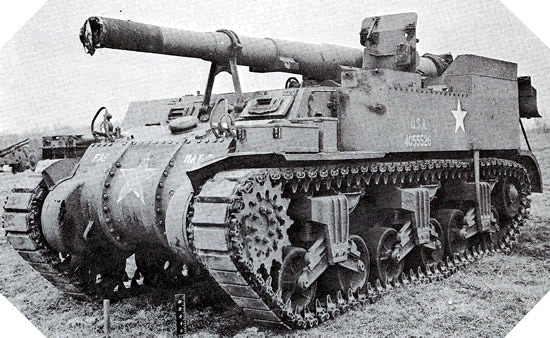 From the very beginning of their involvement in the Second World War, the Americans faced the difficulty of advancing artillery at the same pace as tanks and infantry. Hence the idea of ​​self-propelled guns to provide continuous support to the assault units while allowing to reinforce the firepower during the fixed or defensive phases.

The Americans then reused the M3 Lee/Grant chassis and installed a compartment to accommodate a 155 mm M1917, M1917A1 or M1918 M1 gun depending on availability. This gun is an American copy of the French model 155 mm G.P.F. (also used by the Germans, especially at Pointe du Hoc where six guns are installed to prevent a landing).

If the project is not unanimous at the time of its presentation and is not canceled, the American Ordnance Department successfully maintains its efforts to equip the artillery: the production of this self-propelled gun begins in 1942. This vehicle is then called M12 Gun Motor Carriage (GMC). At the rear of the chassis, a steel blade is installed to ensure better anchoring of the vehicle during shooting. One of its disadvantages lies in the narrowness of the barrel housing, which only stores ten full shells on board. A vehicle specially designed to transport the servants and forty extra shells is then designed, it is the M30 Cargo Carrier: thus, the M12 and the M30 are working together during the displacements.

As part of the preparation for the Normandy landing, 74 units of the M12 GMC are being renovated in order to be hired. They are effectively deployed to provide substantial support to the Allied Expeditionary Forces within the 258th, 557th, 558th, 987th and 991st Field Artillery Battalions. These self-propelled guns participated in the fighting in Europe until the surrender of Germany on 8 May 1945, fulfilling their missions perfectly.