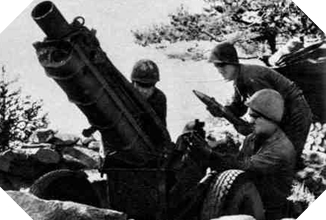 The First World War deeply revolutionized heavy artillery, giving it a leading role in the battle. The French and the British paid for it during the Great War, and the Americans, who were still equipped with French or British equipment, understood the importance of howitzers and heavy cannons at great length.

Thus, in the context of the modernization of the US Army, begun between 1920 and 1940, various studies in the field of artillery emphasize the creation of a cannon of the type howitzer, To operate precisely over a distance of ten kilometers, easy to transport and maintain.

In 1939, on the eve of the official outbreak of the war in Europe, the first shots of the 105 mm M2 howitzer were developed. Quickly, almost a year later, in 1940, the first prototype went out of factory and was immediately validated. Its production in series, fixed to several thousands of copies, begins the same year.

This howitzer is used on the majority of fronts where American units are deployed: in North Africa, in the Pacific, in Europe… It is thus disembarked in Normandy where it participates in the furious “hedgerows war”, offering to the allied infantry a valuable support. Its precision is its strong point, as its transport, very simplified for this type of barrel, despite its weight.