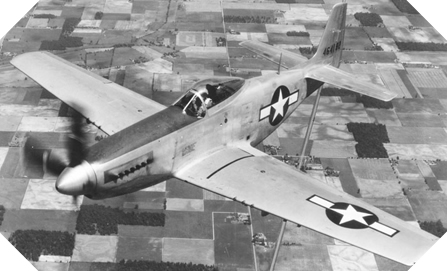 In 1940, the British already bombed Germany. But the German Air Force (Luftwaffe) and the Flak (German anti-aircraft defense) destroy many bombers and the losses are extremely severe: for the Allies this situation must change as quickly as possible to carry out raids also during the day.

Thus, in 1940, North American received an order from the Royal Air Force, the British Air Force, which initially asked him to create a new training apparatus. The North American company quickly developed a high-performance fighter plane that encouraged the Americans to make it their main fighter, capable of escorting the Allied bombers to the maximum and defending them as efficiently as possible. Enemy aircraft, day and night. Its main asset lies in its range of action which is, at that time, extraordinary.

In 1940, the production of this apparatus began. This new fighter is fast, handy and very effective in the context of attacks of objectives on the ground and during aerial combat. This aircraft is named P-51 Mustang. Different models are created, the most manufactured remains however model D.

The P-51 Mustang is extremely dreadful in bombing ground targets and is extremely feared by the German armored divisions.

Today, nearly 150 P-51 Mustang still fly at meetings around the world, out of the 15,000 copies produced throughout the Second World War. It is a symbolic fighter aircraft of this historical period.