Hobart’s Funnies during the Battle of Normandy

Tanks of the Battle of Normandy 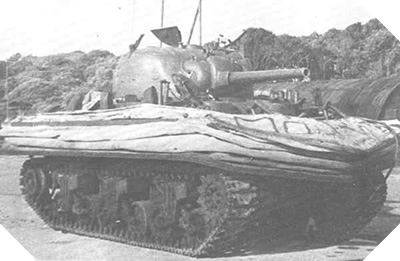 The feedback of the various engagements of the British Army in combat shows a certain lack of adaptation of the English armored vehicles, which are quickly blocked by multiple and various obstacles (this is the case in particular during the Allied landing of Dieppe in August 1942, which ended in failure). The Americans are facing the same problems and the Allies want to find a quick solution.

Indeed, the Allies quickly realized that the support of the armored vehicles in Dieppe was neutralized essentially by the inability to cross Churchill tanks, blocked by the pebbles as well as the natural and artificial obstacles. As part of the preparation for Operation Overlord, it becomes necessary to devise new means capable of enhancing the mobility and firepower of the allied armored fleet.

The British general Percy Hobart, passionate about armored cavalry and responsible in April 1943 for the operational condition of the 79th Armored Division, plans to carry out a series of tests with modifications of structures or additions on his tanks : Its inventions make it possible not only to provide fire support missions, but also missions to support mobility and counter-mobility, especially during an amphibious assault. These armored vehicles are then nicknamed Hobart’s Funnies.

Several tanks were then produced for the Normandy landing, using the base chassis of the British Churchill and the American Sherman.

Which are the Hobart’s Funnies tanks?

– The Avre is a tank equipped with a mortar of 290 mm which uses the chassis of Churchill. Its aim is to provide significant fire support for land forces. Its structure serves as the basis for most other Funnies.
– The Ark is responsible for filling the anti-tank ditches with its own chassis and ramps for other vehicles to pass through.
– The Bobbins, also known as Carpet-Layer, is a tank equipped with a canvas mat deployable on the sand to facilitate the progression of infantry and vehicles.
– The Bullshorn Plow, equipped with a plow to extract the mines without exploding them.
– The Crab, equipped with chains that dredge the ground and trigger the mines arranged at the front of the tank.

– The Crocodile, equipped with a flamethrower particularly effective to fight opponents entrenched in casemates.
– The Duplex Drive, an amphibious tank with a waterproof skirt and propeller propellers.
– The Fascine, used to fill the ditches and trenches with wooden planks on which the infantry can advance.

The Impact of Hobart’s Funnies tanks

From the outset, Americans make the choice not to develop the principle of Funnies tanks. They adopt the principle of the amphibious Duplex Drive tank as well as the demining tanks (Crab and Bullshorn Plow) but do not adopt any other system before Operation Overlord. Anglo-Canadians, on the other hand, divided the various types of tanks belonging to the 79th Armored Division (AD) to the units designated to carry out the assault.

All Funnies tanks are completely satisfactory, with the exception of the amphibious Duplex Drive tanks, a large part of which flows into the English Channel due to adverse weather conditions. Indeed, they are not designed to withstand a major swell and at Omaha Beach, a large number of Sherman D.D. are lost at sea; For those who manage to reach the shore, the effect of surprise is total but their number does not make it possible to make a difference on the beach.

For Commonwealth troops, the Funnies tanks fulfill their missions perfectly. They continued their activities during the days following the landing of Normandy in order to improve the mobility and firepower of the Allied forces.

The Americans are confronted very quickly with the obstacle that represents the Norman hedgerow: no tip imagined by Percy Hobart does not allow them to find a solution. They then developed the Sherman Rhino, equipped with powerful blades, in order to cross the hedges more quickly.

Restricted to shock use primarily for amphibious operations and combat in urban areas, mobility support tanks are less used after D-Day than specialized fire-fighting tanks. By the end of the Second World War, no fewer than 7,000 Funnies were built, but their interest ceased with the end of the war. In August 1945, the 79th AD was dissolved.