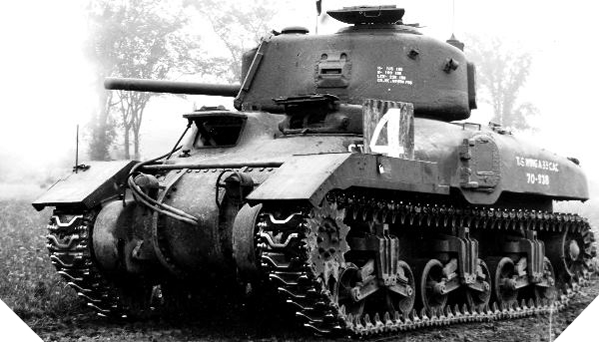 At the beginning of the Second World War, Canadians built tanks that were sold to Great Britain. They thus possessed a certain know-how in this field, that they also used their own armed forces in 1941, the same year that their American neighbors entered the war.

The Canadians made new from the old, reusing the chassis of the American M3 Lee/Grant tank and thus giving birth to the tank Ram mk I. They added a new superstructure and changed its armament, endowing it with a good power of fire. 50 copies of this first version of the Ram are built in Montreal at the Montreal Locomotive Works plant before launching production of the second model: Ram Mark II.

Changes to this new version include: a new cannon (the old two-pound gun is replaced by a new one of six pounds), new suspensions, suppression of pitches and other technical changes.

However, this tank is quickly overtaken by Grant’s replacement, M4 Sherman, which massively equips the armed forces belonging to the Commonwealth. The Ram mk II was then used before the Normandy landing as a training tank in Great Britain and some gear underwent modifications to be used as an armored command vehicle (including six crew members, additional transmission equipment As well as a dummy cannon) or as a flamethrower.

The Ram tank is used by the Canadian forces during the Battle of Normandy, in addition to the Shermans. Their use is limited to reconnaissance missions or transport of command posts as well as assault troops (modified version of the Ram without its turret: the Ram Kangaroo).

After the Second World War, copies of the Ram mk II were handed over to Holland, thus avoiding the Allies repatriating them. They armed the first two armored battalions of the Dutch army until 1952.