History of the Tiger tank – Panzer VI – Battle of Normandy 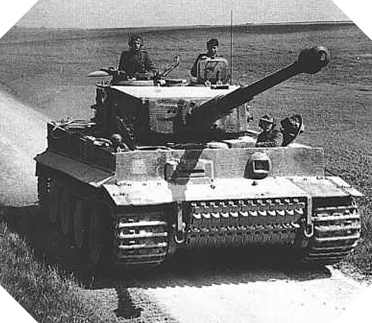 The design study of the Panzerkampfwagen (PzKpfw) VI Tiger I began in 1937 and it was in 1942 that it began to be produced. The two companies that are responsible for its construction are Porsche and Henschel.

It is a heavy tank (more than 50 tons) capable of passing through all kinds of obstacles and resisting the last tanks armed with the 85 mm gun (T34/85) while replacing the PzKpfw II and III which were not very brilliant against the French and British tanks in 1940.

Armed with a 88 mm gun that is none other than the excellent 88 mm Flak 36 gun mounted on turret, the Tiger I tank is equipped with a large shielding (between 8 and 10 cm of shielding according to the locations) Protecting it against the vast majority of anti-tank weapons and ensuring its invulnerability against frontal shots.

The tank PzKpfw VI received the name Tiger I in August 1942 and on March 5, 1943, he baptized fire on the Russian front at the Battle of Leningrad.

Now the undisputed master of the battlefields in Europe, the Tiger combines good protection, great mobility and incomparable firepower. He dominates the American Sherman and his British counterparts.

Nevertheless, a number of defects are to be noted: its gearbox breaks frequently and the Tiger is often the victim of engine breakdowns. The tank is so heavy that it is used to the limits of its capacities. Most of the Tigers are not neutralized by the Allies but abandoned by crews as a result of mechanical problems. Finally, the lack of fuel at the end of the war is problematic for the Tiger because it consumes enormously. Moreover, it is also difficult for German industries to produce as many tanks as necessary.

In Normandy, if the Panzer divisions are endowed with Tigers to launch an armored counter-offensive (three battalions are equipped: 101. and 102. SS-Panzer-Abteilungen and 503. Panzer-Abteilung), these tanks are too Few to really hinder the Allies. Nonetheless, actions such as those carried out by Michael Wittmann on PzKpfw VI Tiger I mark the superiority of this tank, considered one of the best armored vehicles of the entire Second World War.