History of the Sturmgeschütz IV tank destroyer – Battle of Normandy 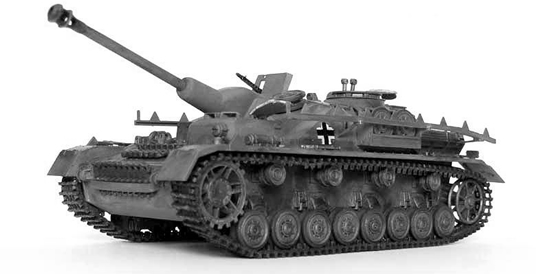 The Germans are behind the concept of assault artillery, which represents a highly armored armored vehicle capable of overcoming fortified points during an offensive phase, following the maneuver. The support needs of the assault artillery originated with the First World War and the German military confirmed its usefulness before the Second World War.

As early as June 15, 1936, the Germans were studying a first prototype which gave birth in 1942 to the G version of the Sturmgeschütz III range, designed and built by Daimler-Benz. With the increasing need for tanks, the company Krupp was involved and in 1943, it set up a prototype based on the Panzer IV chassis, which it also produced. On this chassis, Krupp adds the superstructure of the Sturmgeschütz III Auf. G and the final product gives rise to Sturmgeschütz IV (StuG IV).

In December 1943, this prototype was presented to Hitler who validated it: at that time the firm involved in the construction of the StuG III has just been bombed and production is slowed down considerably; Efforts were then made to build the StuG IV.

Lighter than the StuG III, the StuG IV proves to be an excellent tank destroyer that sows terror, especially on the eastern front. It is also deployed to the west during the battle of Normandy where it becomes one of the priority targets of the allied aviation.