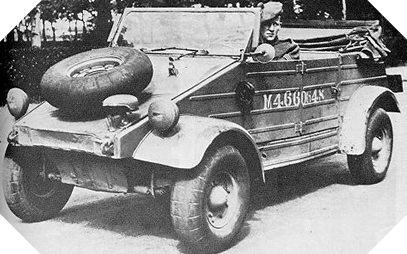 It was in 1936 that the project to adapt the civil Volkswagen 60 into a military vehicle, able to transport four people with their equipment. The first prototypes were produced in 1938 and the German army selected one of the models that attracted his attention.

Production began immediately, and the first one came into service in the German army in December 1939. This vehicle was officially named “Kübelsitz-wagen” model 82, but very quickly the German military nicknamed it Kübelwagen.

This vehicle immediately appears as a very resistant and robust car, capable of evolving on different terrains. Two other versions were produced from 1940: one capable of evolving in arid zones, the other in very cold areas. Nearly 55,000 copies of the Kübelwagen model 82 were built throughout the Second World War.