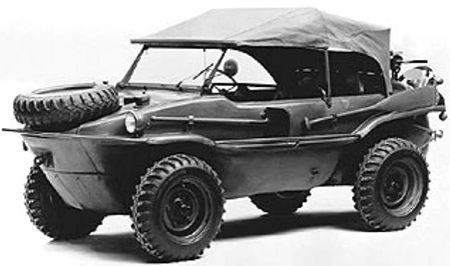 It was in 1936 that the project to adapt the civil Volkswagen 60 into a military vehicle, able to transport four people with their equipment. The first prototypes were produced in 1938 and the German army selected one of the models that attracted its attention.

Production began immediately, and the first one came into service in the German army in December 1939. This vehicle was officially named “Kübelsitz-wagen” model 82, but very quickly the German military nicknamed it Kübelwagen.

Many versions come from this vehicle with the clean concept. One of them is an amphibious model called Schwimmwagen, literally the “swimming car”, produced in 1940. It is produced in the Bugatti factories in Molsheim in Alsace, Fallersleben and Stuttgart in Germany. To cross wet cuts by transporting the same amount of personnel and equipment as the Kübelwagen model.

The Schwimmwagen is used as a vehicle for connecting, recognizing or evacuating the wounded. During the Battle of Normandy, these vehicles captured by the Allies are often re-injected into their own units after the addition of the famous star on the crate.