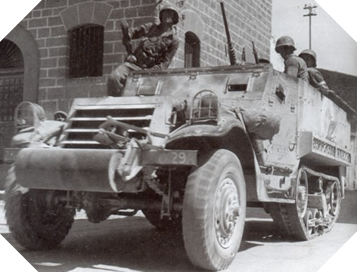 In 1931, the American Army wanted to equip itself with a semi-tracked troop transport vehicle, as in the French Army. Inspired by various models, and in particular the French Ke17resse P17, the Americans are developing their own half-track vehicle.

In 1940, when nearly 70 different models were proposed to US land forces, the decision was made on the M3 model, which began to be produced the same year. Widely used during the Battle of Normandy, they are particularly well suited to the Normandy bocage, especially during the heavy periods of rain which transform the fields into vast expanses of mud.

Although these vehicles were used until the end of the Second World War, production of the M3 Half-track stopped in 1944.

Different versions of the M3 Half-track were also produced between 1940 and 1944, including a model (named ACP) armed with a 75 mm anti-tank gun.