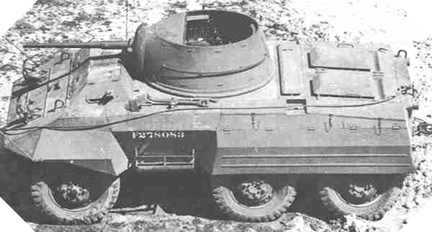 In 1941, the M8 Greyhound was initially conceived as a heavy tank, but quickly, during the development of the plans of this machine, the American engineers decided to make it a reconnaissance vehicle to provide support to the infantry, equipped with a 37 mm gun.

In the same year, he joined the US Army. The fire baptism of the M8 Greyhound light reconnaissance vehicle took place in Italy in 1943 and was used throughout the rest of the Second World War.

Light and fast, the M8 Greyhound has many difficulties when maneuvering off-road because of its low mobility due to its six-wheel drive. This pushes the US military to limit its use to armored tracked units.

A version without turret of the M8 is also created, it bears the name of M20 Scout Car.

As Americans did not want to re-use the M8 Greyhound light tank in their army after the war, they decided to deliver copies that were still available to many countries around the world. This armored craft remained in many armies until the 1960s and some countries still use it.