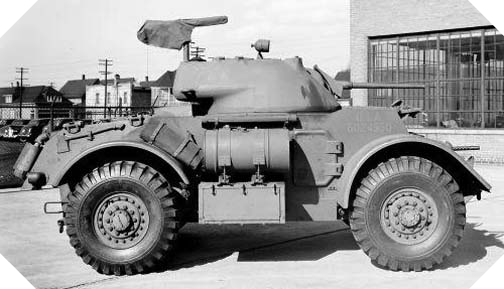 In July 1941, the US Army issued a tender to equip itself with a light armored reconnaissance vehicle. She selects the model T17 nicknamed “Staghound” of the Ford Motor Company in 6×6 then the model T17E1 of Chevrolet in 4×4. But ultimately, the US adopts the M8 Greyhound which more closely matches their expectations.

At the same time, the British are looking for an identical vehicle and they take Chevrolet’s proposal back and adapt it to their needs, especially for desert missions. Production of the T17E1 began in October 1942 and about 4,000 units were built.

It is a light armored vehicle on which is placed a tank turret protecting a 37 mm M6 gun with a coaxial machine gun. Its towering wheels can withstand battlefield shards and small arms fire and its armor provides significant protection.

Its silhouette is high enough for a reconnaissance vehicle, notably because of the turret with which it is equipped. Its first operational engagement took place in Italy and it was also present during the Battle of Normandy where it equiped both the English and the Canadians. Penalized by a very large span, it remains relatively unused in the front line.

After the Second World War, many nations were equipped with the Staghound. Some copies were used until the 1980s as in Lebanon.