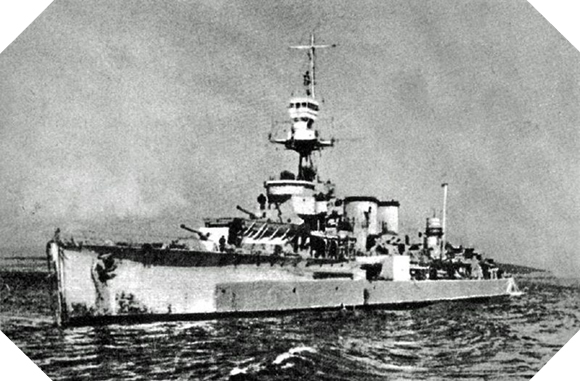 The Class D cruiser H.M.S. Danae was launched on 1st December 1916 during the First World War and entered service on 26 January 1918. Its first missions were devoted to patrols in the North Sea before taking part in the conflict between the White and Red Russians from October to November 1918. In February 1920, the Danae was deployed in the Atlantic in the first flotilla of light cruisers.

In the second half of the Twenties, it participated in escort missions in the Mediterranean to the benefit of the 1st cruiser fleet, then returned to the United Kingdom to be modernized. In 1935, it was engaged in Southeast Asia and became the target of Japanese navy forces at the beginning of the conflict between Japan and China.

Attached to the ninth flotilla of cruisers at the beginning of the Second World War, HMS Danae patrolled the seas and oceans of Southeast Asia before spending eleven months at the dock in rehabilitation. Returning to active service in July 1943, it was deployed in the English Channel in March 1944 in order to participate in Operation Neptune in the 1st cruiser fleet.

On June 6, 1944, it operated off Sword Beach and bombarded the German batteries in the Ouistreham area. In the days following the landing of Normandy, it supported with its fires the Commonwealth troops in the region north of Caen. In August 1944 it made its way to the port of Plymouth, where it was to be demilitarized.

But in October 1944, the Danae was handed over to the Polish naval forces fighting alongside the Allies. It was then baptized ORP Conrad and joined the 10th flotilla of cruisers on April 2, 1945. However, subject to severe damage, the Conrad was put on the dock for long weeks and was only available on May 30, three weeks after the Capitulation of Germany.

On September 28, 1945, ORP Conrad was again transferred to the Royal Navy, before finally leaving active service on January 22, 1948, and then being scrapped on March 27, 1948 in England.