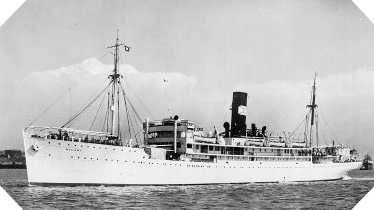 S.S. Hilary is a British civilian transport ship launched on 17 April 1931 for the benefit of the Booth Steamship Company. Comprising 80 first classes and 250 second classes, she is intended to carry passengers from the United Kingdom to South Africa. Required by the Royal Navy on October 16, 1940, which transformed it into a warship, she was named F22 HMS (Her Majesty Ship) Hilary.

Carrying allied soldiers across the Atlantic, she was torpedoed in October 1942 but the torpedo did not explode. Re-armed the following year in a projection and command building, she participated in Operation Husky in Sicily in July 1943 for the benefit of the 1st Canadian infantry division as well as the Royal Navy’s commandos, on board Admiral Philip Vian. She then took part in Operation Avalanche in Sicily, before joining Portsmouth in December 1943.

Committed during Operation Neptune as the flagship of Force J, she led the convoy J11 to Juno Beach. Slightly damaged as a result of an air attack on 13 June, she replaces the HMS Scylla’s flagship, HMS Scylla, on 23 June, defeated by an underwater mine.

In 1945, the HMS Hilary is returned to its first owner, the Booth Steamship Company. Comprising 93 first classes and 138 third classes, she connects the United Kingdom to South America until 1959, when she is finally scrapped.