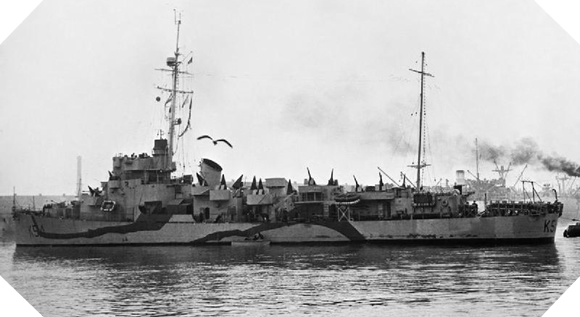 It was at the beginning of 1944 that the United States, according to the Lend-Lease plan, constructed and ceded an Evarts escort destroyer to Great-Britain, called USS Lawford (DE 516). Renamed “HMS Lawford” by the Royal Navy and transformed into a Captain class frigate, it was then prepared to participate in Operation Overlord off Normandy.

This frigate served as the embedded command post of Assault Group J.1 for Juno Beach. On the night of June 5-6, 1944, it sailed within Task Force J and the staff aboard, commanded by Captain Pugsley, coordinated the landing operations on Juno Beach on D-Day.

On 8 June, the Germans launched an aerial counter-attack aimed at the allied war ships in the Bay of Seine. The HMS Lawford was targeted and received a direct shot that made it sink to 21 meters depth: 37 crew members were killed.

According to the study of the testimonies of the seamen (the latter referring to the use of “aerial torpedoes”) and the wreck itself (which sank as a result of an internal explosion), the frigate was allegedly shot by several German missiles of the first generation, probably of the Henschel Hs 293 type.