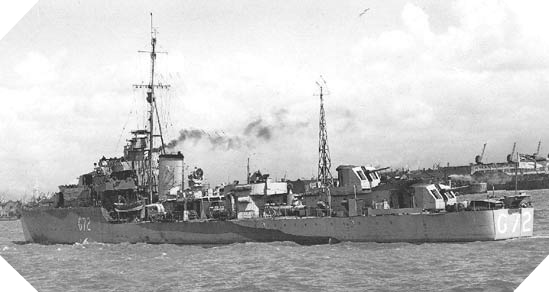 This S-class destroyer was launched on August 26, 1942 and entered service on May 11, 1943. It is chronologically the eleventh war ship of the Royal Navy bearing the name “HMS Scorpion”. After a series of exercises at sea, it was engaged in the English Channel and the North Sea where it carried out patrol and convoy escort missions. In particular, it participated in the Battle of the North Cape, during which it obtained a direct hit on the German warship Scharnhorst.

Engaged off Normandy during Operation Overlord, it was integrated for the occasion at Task Force S and also operated within the Bombarding Force K. In charge of protecting the convoys to Sword Beach on the night of 5 to 6 June, 1944, against possible intrusions of German speedboats, it also participated in the naval fire support of the Allied landed troops on D-Day.

After the end of the war in Europe, it was placed in reserve and was sold to the Dutch navy on 1 October 1945. It was renamed “Kortenaer” and transformed into a fast frigate in 1957 and was finally retired from active service in 1962 before being scrapped in the Netherlands.