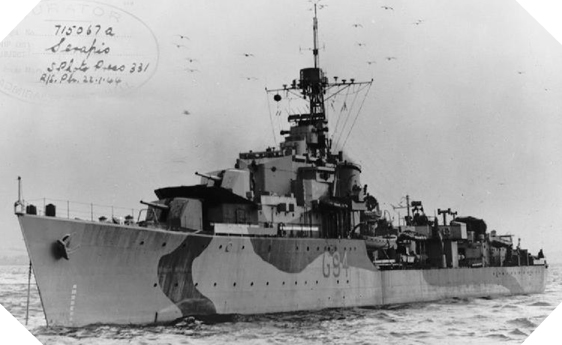 This S-class destroyer was launched on 25 March 1943 and entered service on 23 December of the same year. Called HMS Serapis, it is deployed in the English Channel and in the North Sea waters among the 23rd fleet of destroyers in order to carry out patrol missions and escorts of convoys, in particular for the benefit of the Soviet Union.

In May 1944, as part of the preparations for the landing of Normandy, it was integrated into Bombarding Force D, which was itself subordinated to Task Force S. The Serapis escorted convoy S2 (also comprising the 15th minesweepers fleet) across the English Channel during the night of June 5-6, 1944, heading to Sword Beach, and then participated in the fire support of the Allied troops landed at Lion-sur-Mer on D-Day.

After the battle of Normandy, it resumed its missions in the North Sea, intervening in particular off the coast of Norway.

When the Second World War was over, this destroyer was sold to the Dutch navy on October 2, 1945. Renamed HNLMS Piet Hein, it was placed in reserve on October 16, 1961 and then scrapped in 1962.